Shinsho Anzai is a free agent

Shinsho Anzai is a free agent. The Japanese welterweight is no longer under contract to the UFC but is still training and says he wants to fight again as soon as possible:

Anzai (10-3) was submitted by Jake Matthews at UFC Fight Night 132 in Singapore last year. That loss snapped a two fight winning streak for the 33 year old and it is unclear whether he was cut by the promotion or simply fought out his contract.

Anzai leaves the UFC with a very respectable 2-2 record despite only fighting four times in five years. He scored wins over Luke Jumeau and Roger Zapata but was beaten by Alberto Mina and Matthews.

On Twitter the former welterweight King of Pancrase states that ‘My UFC contract is over and I want to fight again as soon as possible’. He has been training with several ONE Championship fighters including middleweights Ken Hasegawa and Yuki Niimura.

The welterweight title will be on the line again at Pancrase 306 this weekend. Anzai never got a chance to defend that belt before signing with the UFC and could be tempted to return to the Japanese promotion where he made his name.

Since making his pro debut a decade ago Anzai has never managed to fight more than two times in a calendar year. But he has still managed to put together a formidable record and remains one of Japan’s top welterweights.

The 33 year old shouldn’t have to look too hard to find a promotion willing to offer him fights and it will be interesting to see where he ends up. 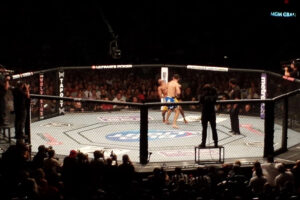 Is the UFC heading to Singapore?