There is a weight on the shoulders of Shinya Aoki. He is not just concerned with beating Eduard Folayang on Sunday; the former lightweight champion feels he has a vital role to play in making ONE: ‘A New Era’ a success,

“It is the first event in Japan, and I feel more responsible for making it a good event. I have felt strongly about how I want (ONE Championship) to come to Japan, the the birthplace of martial arts.”

Folayang handed Aoki the first loss of his ONE Championship career. It was a devastating blow but the 50 fight veteran has seen it all before in his 16 years as a professional. 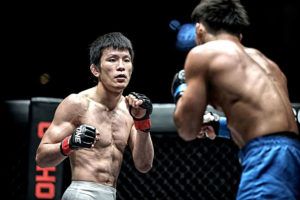 Aoki thinks this experience will make the different in their rematch, which headlines the star studded ONE: ‘A New Era’ card,

“It’s my biggest advantage over him. I have been fighting ever since 2003 and I have experienced losses and fought in unstable environments so I know the fear and how to survive. I have the experience to live through it, which will help me a lot this time.”

Aoki is always frank in interviews about the trepidation he feels before fights. This will be his first fight in Japan since 2015 and he is headlining a card that will go down in MMA history.

“I am not confident at all, I am very scared. There is no room in my mind to think about continuing my winning streak, that is how much I am scared of the next fight.” Aoki always talks like this before fights, and he normally wins. He’s scored three first round stoppage wins in quick succession to set up this title shot but is philosophical about his chances against Folayang,

Anyone who has seen how emotional Aoki gets after his fights could question how genuinely he subscribes to this particular theory. The 33 year old is fiercely competitive and says he uses fear as a source of motivation,

“I’m scared to go into a match (so) to forget the fear I practice every day.” Some fighters talk about being excited before a big bout. Few will openly discuss fear but Aoki is definitely not your average mixed martial artist.

He understands why other people are looking forwards to ONE: ‘A New Era’ but the headliner feels the pressure and expectation acutely,

“The only people who are excited are fans and people around me. I feel more responsible that I have to make it a good event,” he says.

There are fighters bursting onto the scene now who would barely have been born during Pride’s heyday. Aoki has seen the Japanese scene explode and then regress but feels real hope for the future,

“I strongly feel that we can revive (Japanese MMA) by getting the most elite fighting group to come to Japan. So I think to bring the fights back and have the support of the people here, and have them see me, will help bring forth the next generation of fighters, and I would like to encourage that.”

However he doesn’t see himself as being a role model or ambassador and says he has enough on his plate having to prepare for opponent’s of Folayang’s calibre,

“I am putting all my energy into what I am doing now. I still cannot imagine myself creating a new Japanese MMA era or becoming the Japanese MMA leader (because) I have enough to do with what is in front of me.”

Since beating Aoki the Filipino has lost the title and regained it. But the former champion is not too concerned about any improvements his opponent might have made,

“It doesn’t matter for me if he improved or not, so I don’t think I need to evaluate him.”

While Aoki is reluctant to discuss Folayang that doesn’t mean he won’t have prepared thoroughly for this fight,

“I am just focusing every day, working hard so I can spend a career that I can be satisfied with. I do not have a dream to go down in history,” he said.

The quantity of titles he has won along with his unique style and personality ensure Aoki is unlikely to be forgotten in a hurry. The 35 year old will have plenty to be proud of when he looks back on his career but winning back the ONE lightweight belt in front of the fans in Tokyo would surely be a special moment.