Stamp Fairtex has described ONE Championship atomweight champion, Angela Lee as her ‘idol.’

Stamp will take on Ritu Phogat in the final of the ONE Women’s Atomweight World Grand Prix at ONE: ‘Winter Warriors’ on Friday. If the Thai star gets the win, then she’ll be next in line for a crack at Lee’s title.

The trio were all on a media call together on Tuesday evening, and Stamp took the opportunity to pay her respects to the champion.

“You are my idol,” said Stamp.

“I will do my best during this fight and one day I will try my best and have a show with you,” she added. 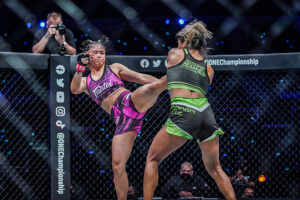 The call was hosted by ONE play-by-play commentator Michael Schiavello who received another humble answer when he asked Stamp directly how she would beat Lee if she gets the chance to fight her.

“It’s a very hard task for me because she is very great in this game and I will have to go back and train myself even harder,” she said.

Still just 24 years old, Stamp has plenty of martial arts experience at the elite level having been the former ONE atomweight champion in both kickboxing and Muay Thai. Having lost both of those in 2020, the Rayong-born striker has been able to focus primarily on MMA.

Throughout the Grand Prix, Stamp has shown plenty of improvement in her overall game and followed up a gritty, split decision win against Alyona Rassohyna with a unanimous decision victory against Julie Mezabarba in the semi-final.

The match-up with Phogat will be a classic striker vs grappler affair. Phogat has sought to take her opponents down in all eight of her professional fights and won the gold medal at the 2016 Commonwealth Wrestling Championship in Singapore.

Despite showing plenty of improvement in her own ground game, Stamp is under no illusions as to where her strengths lie and will try to avoid sinking into Phogat’s preferred realm on the canvas,

“I think that everyone is experiencing some pressure in every fight. Both of us should be feeling the same amount of pressure. If the fight goes to the ground, I will have to find a way to get back into my own game. I will not play her game. I think that if she would try to stand and fight with me, she would get knocked out,” she said.

Whomever comes out victorious on Friday, it will mark an historic achievement for either fighter. If Stamp gets her hand raised then she’ll be the first Thai fighter to win a world title in a major MMA promotion, while Phogat would be the first Indian fighter to achieve that landmark.