Double G 5 took place on Saturday night in Seoul with two inaugural titles up for grabs. Tae Ho Jin and Rae Yoon Ock were able to impress the judges and take home a championship belt.

Jin pulled off the upset in the main event and defeated streaking prospect Han Seul Kim to win the welterweight title. Heading into the matchup, Kim was the massive favorite but Jin did not get the memo and powered through to get the tough win.

Kim blasted out the gate light on his feet and landed counters while Jin took some time to get his engine started. The first round consisted of constant feinting and gauging distance so the action was limited with both fighters connecting sparingly.

The middle round is where Jin turned it on and adjusted his approach. The Korean Top Team representative pushed forward and forced his foe to backpedal constantly. This created many openings and all kinds of problems for his opponent.

Even though Kim connected with counters, Jin ate them and landed shots of his own that were equally devastating. After double right hands, he landed a right hook that staggered Kim. They embarked on a wild exchange yet nothing landed flush.

Kim ended the round with two takedowns but did nothing arose while he was in an advantageous position. Jin continued his pressure attack and mixed in the teep to the body. 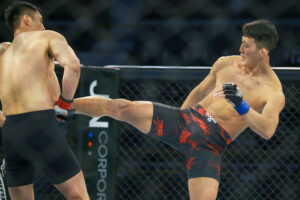 While Kim tried for a takedown, Jin attempted the guillotine and pulled guard. Kim withstood the choke and eventually pulled his head out but after inactivity, the ref stood them up.

Kim again tried to drag the fight to the mat and Jin took advantage by scrambling to the back and digging in the hooks. Peppering shots from that position and attempting the choke killed a lot of time off the clock.

There was nothing to choose between the two but in the end two of the three judges voted for Jin (9-5) who claims his first professional title via split decision and extends his winning streak to four. Kim (10-4) loses for the first time since 2015. 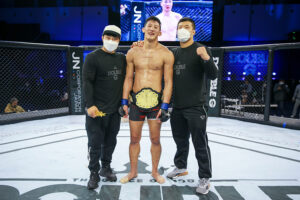 The co-main event lightweight title fight was a battle of attrition. In the end Rae Yoon Ock outlasted Won Bin Ki to capture the inaugural belt with a unanimous decision win.

It was clear from the start that Ki was looking to implement a clinch heavy game plan to possibly slow down the attacks of Ock. This strategy backfired and the Team Mad product was able to capitalize when they locked up. 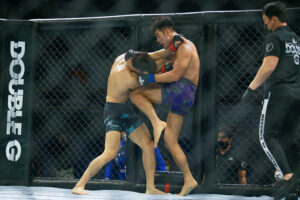 Every time they would clinch, Ock chipped away with uppercuts and knees. Even though they both did their share of dirty boxing, the damage accumulated and was shown on the face of Ki.

There were brief moments when Ki would land a solid shot but Ock pretty much dominated with an unbelievable gas tank and accuracy with his punches.

By winning the Double G lightweight strap, Ock obtains his second title in Asia and elevates his record to 13-3, meanwhile, Ki drops to 14-7. In the featherweight title eliminator, Jun Young Hong (10-6-1) and Sang Won Kim (6-4-1) put the pedal to the metal. They had fought to a draw at Double G 4 and weren’t going to leave it in the hands of the judges a second time.

Both fighters rocked each other on multiple occasions with crisp boxing combinations in the first round but it was Hong who landed the more damaging shots.  The doctor stopped the fight before the start of the second stanza after thoroughly examining Kim’s right eye and deciding he was unable to continue.