Takasuke Kume wants to take on the top lightweights

Takasuke Kume is an experienced fighter. He has fought over 20 times for Road FC, Pancrase and Shooto since making his pro debut in 2007.

But October 13th represents the opportunity of a lifetime for the 34 year old. Having been one of the top lightweights in Japan and Korea for several years he finally has the opportunity to break out onto the global stage.

Kume is booked to face Koshi Matsumoto at ONE: ‘Century’. He will be representing Pancrase but an impressive performance could see him make a clean break from the Japanese promotion.

He is hoping to convince the ONE Championship matchmakers that he has a long term future fighting for them,

“I want to prove myself in ONE for the remainder of my career. There’s a lot of strong competitors in ONE. I think there are some challenging matches waiting for me, and I want to test myself against the strongest,” he said. 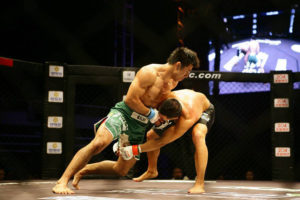 Kume has won six out of his last seven bouts and is the reigning Lightweight King of Pancrase. He has challenged unsuccessfully for the Road FC 155lbs strap three times and will draw on this experience ahead of his fight with Matsumoto,

“I have plenty of experience, and  I want to take all challenges as they come. Whoever I’m matched with, I’ll give a great fight. I get motivation from facing strong opponents.”

The title losses at Road FC were not without controversy. On every occasion he was matched with a Korean opponent and the judge’s decisions were not met with unanimous approval,

“When I lost the third title match in Korea, it was hard. I had lots of support, and some even flew over to Korea. I was really down after that,” he recalls. 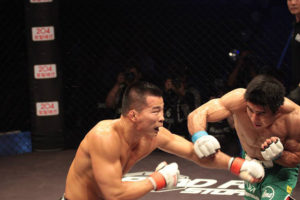 In this context it is no surprise to hear Kume talk about how much it meant to finally capture a title by claiming the Pancrase strap in 2016,

“Winning the Pancrase title was the happiest moment in my career. I made a lot of mistakes earlier on, so becoming champion is by far my best memory.”

Kume began his journey in martial arts as a judoka.  At first it was just a way to stay fit but he soon fell in love with the sport,

“What I love about judo is the beauty of a clean ippon. When you get the timing right, it feels great to get a clean throw. I wasn’t thinking about becoming a professional athlete, I just wanted to move my body,” he said. 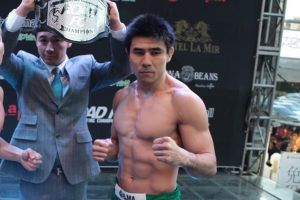 He was drawn to the complexities of MMA. Kume’s career has had it’s ups and downs but with a 22-6-3 record and a title to show for it there have been more of the latter than the former.

He has been a professional for 12 years and is still delighted by the challenges and tribulations of life as a full time mixed martial artist,

“The fascination of mixed martial arts is how a match unfolds. You need ingenuity and there are various ways of approaching it and engaging opponents which changes how it plays out. It’s a tough win-lose world but it’s a wonderful thing.”

There are many Japanese lightweights on the ONE Championship roster. Shinya Aoki, who will also feature on ONE: ‘Century’, is a name that springs immediately to mind. 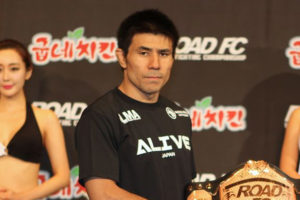 Should Kume prosper he can expect some big fights and career high paydays. $50,000 USD in prize money is on the table for the winner of his bout with Matsumoto.

But winning at ONE: ‘Century’ is not about the money, at least not in the short term. It’s about the opportunities that would surely follow and Kume is fully focused on putting in the right performance on October 13th,

“Right now I’m only thinking about Koshi Matsumoto but I’ll be in the best condition possible for whoever is in front of me.”