Takuya Yamamoto returned to winning ways at Shooto 0115 on Sunday, stopping Derricott Yamamoto in the second round. The 28-year-old bounced back from a first round loss against Rikuto Shirakawa at Rizin 31 which snapped his six fight winning streak.

Derricott Yamamoto has competed in Shooto for the majority of his career and came into the fight on the back of consecutive losses having been submitted in the first round by Tateo Iida at Shooto 0919 in Osaka.

Takuya opened up with low kicks on either side and uncorked some right and left hooks. He then scored a takedown, putting Derricott on his back for the first time in the fight. 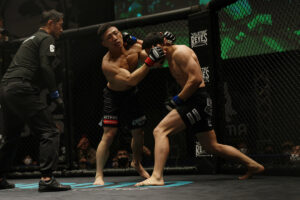 Derricott found his feet briefly but was under his opponent’s control once more as Takuya took the back and showcased his overall superiority in the grappling exchanges, driving his opponent into the side of the cage and smashing him with a left hook. Derricott was briefly able to get up but was met with a whirlwind of punches and would have been grateful to hear the bell.

In the second round Takuya sought to work on the inside and landed punches before getting caught with a knee. He then absorbed a right hook before countering with a sweet left hook of his own that sunk Derricott to the canvas.

Takuya landed a follow up punch but as this stage the referee decided he had had seen enough waved it off. His record climbed to 8-2-1 with the win coming at the 0:27 mark while Derricott drops to 11-10-1. Loibe Neto (6-3) knocked out Kenji Kato (14-10) in the second round of the co-main event. The Brazilian was making his Japanese debut and got back in the win column with the finish coming at the 4:37 mark.