UAE Warriors will return next month after a four-month hiatus.

UAE Warriors 11, originally scheduled for March 31st, is now set for June 12th at the Mubadala Arena Hall in Abu Dhabi with no audience in attendance.

According to Saudi 24 News, fighters and their teams will follow the protocol put in place by the organization to protect the safety of all participants from the threat of Covid-19. They will be required to fly into Abu Dhabi more than 18 days before the event in order to go through all the necessary medical examinations.

Throughout that period, they will stay in isolation in the fighter hotel until the results return. Periodic examinations will also be conducted leading up to the event and all personnel will be quarantined as well.

Tarek Suleiman (9-6) is the reigning UAE Warriors light heavyweight champion. He will headline the event, facing Juscelino Ferreira (10-2) in a non-title catchweight clash.

Suleiman snatched up his first major championship a year ago at UAE Warriors 6 with a second-round knockout of UFC veteran Oli Thompson. He is coming off a submission win over Steven Kennedy in a non title middleweight bout at UAE Warriors 10.

On the same night Suleiman captured the title, Ferreira was successful in his promotional debut against Ibrahim ElSawi with a dominant three-round affair. The Brazilian is riding a three-fight win streak and holds the X-Fest middleweight title.

The event will consist of ten fights. Representing UAE will be featherweight Ahmad Al Darmaki (1-5) but the identity of his opponent has not yet been announced. 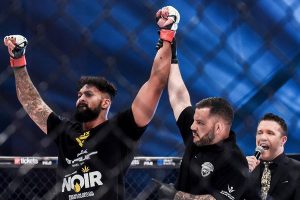