Having gone undefeated in seven bouts as a professional mixed martial artist Japanese wrestler Kazuma Kuramoto is understandably confident as he heads into his first title bout of his career.

The four-time All-Japan Greco-Roman wrestling champion is set to square off with bantamweight kingpin Ryo Okada in the main event of Shooto 0531. The event takes place behind closed doors at an undisclosed venue tomorrow.

Okada is the reigning bantamweight champion. But the weigh in regulations have been tweaked due to the coronavirus, or Covid-19, pandemic so the interim strap will be on the line.

Should Kuramoto win he certainly won’t be letting the ‘interim’ tag attached to his new title spoil the celebrations,

“I don’t mind at all. If I beat him, then I am the champion. The weight is just different. But it’s basically the same thing. I am here to challenge and beat the champion,” he said through a translator. Kuramoto does not deny that he faces a real challenge in the shape of Okada. The champion is significantly more experienced in MMA terms but he is confident he can pull off the upset,

“Okada is a veteran of MMA with an impressive track record, and he is certainly one of the most skilled opponents I have been matched against. But I believe I can defeat him. I know my capabilities so well,” he stated.

The 33-year-old believes that he is the underdog for this match-up. Rather than seeing that as a negative, he feels it is a valuable source of motivation,

“He is a favorite and I am an underdog in this fight, but I like fighting as an underdog. It has always been the case since I made my MMA debut. Being the underdog did bring out the best in me in my previous fights. It made me more hungry. I am bringing that same drive in this fight,” Kuramoto explained. Kuramoto was nothing short of spectacular in his last four assignments, finishing three of them by way of first-round stoppage. Though the trend broke when he fought Yuta Nezu this past November at Shooto Anniversary Tour Eighth Round, he still managed to clinch a dominating with the former featherweight champion quitting on his stool at the end of the second round.

He gave Nezu a wild ride in the contest by executing seven German suplexes towards the end of the second round. Dazed and confused by the series of high-impact slams, the latter chose to throw in the towel.

To prepare for Okada, Kuramoto has completely thrown himself into rigid training for almost three months after hearing rumors that he would be next in line for the title,

Despite being a wrestler for most of his life, he expects to hold his own against an experienced MMA competitor who has been a professional since 2009 and is a veteran of 22 fights,

“Okada is a tall and gifted athlete. He is also a well-rounded fighter with great stamina. I do not see any big holes in his game, but I noticed a couple of mistakes that I am not going to mention now,” Kuramoto said. 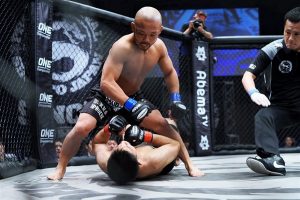 Kuramoto is confident in his preparation. He says he his team has put together the perfect game plan for this fight,

“I’ve stepped up my workout regime, reinforcing my grappling and striking skills. My coach and I are working on a solid game plan now to get me ready for war. As I said, he is a well-rounded fighter and I have to work hard to get the victory,” he added.

Kuramoto knows that a title-clinching performance versus Okada will inevitably lead to bigger and better opportunities. He is excited to see the sport growing in Japan and wants to ride that wave of momentum wherever it takes him,

“I see that Japanese MMA is thriving again, and I want to be part of it. If I win this, I know more and better opportunities will come,” he declared. Dave Leduc wants to sign for ONE Championship, fight on the same card as Aung La Nsang in Yangon (Video)

Stamp Fairtex faces undefeated Thai opponent at ONE: ‘No Surrender’