Alaoui got off to a bad start. Whenever he initiated the clinch in order to utilize his wrestling, de Oliveira took him down, it happens three times at the start of the round.

Once they separated and got back to the center, the Brazilian opened up and landed kicks from all angles. The strikes to the body seemed to wear down Alaoui slowly and his opponent was able to land several overhand rights upstairs. 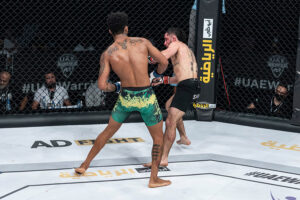 At the start of the second frame, Alaoui did take down the Brazilian but was meet with a triangle choke attempt which allows de Oliveira to escape.

The Canadian was bloody and beaten by that point and on the back foot while de Oliveira pressed forward and landed at will. Alaoui could not get any offense going and the hematoma over the left eye was growing by the second.

‘Lok Dog’ swarmed and hit a combination consisting of a head kick, right hand, and downward elbow that ended the fight after Alaoui dropped to the canvas.

The 25-year-old de Oliveira (16-2) earns his fifth straight victory and has the UAE Warriors bantamweight strap wrapped around his waist. Alaoui (12-4), on the flip side, is finished for the first time in his career. 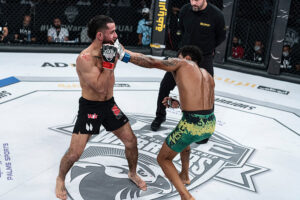 The co-main event of the night had two UFC veterans facing off. Sean Soriano completely annihilated Noah Lahat from bell to bell and picked up a knockout victory in the opening round.

It was apparent from the start that Soriano was the better striker. While Lahat was rushing forward, the Sanford MMA mainstay clipped him with two short uppercuts. Feeling somewhat rocky, he backed off and circled away.

Lahat was hit with a stinging calf kick which he had to shake off. After some trading on the feet, Soriano dropped his Israeli opponent with a crisp left hook.

Ground and pound ensued, Lahat turned his back while getting up and was nailed hard with a couple of right hands behind the ear and he went limp. A couple more unsolicited shots and it was all over.

Soriano extends his streak to three and elevates to 14-6, meanwhile, Lahat has dropped his three out of five and moves to 13-5 overall.