MMA might be banned in Afghanistan but that doesn’t stop fighters from training. Ahmed Wali Hotak shared some footage of himself hitting pads on Instagram and the 32 year old is clearly staying in shape.

His last fight was exactly a year ago for local event TGFC. But the promoter has subsequently fled the country after the Taliban took over and banned MMA.

So it doesn’t look like Hotak will be fighting any time soon but he is certainly not letting himself go:

Hotak has had an interesting life. He was the victim of an attempted kidnapping in Kabul and spent over a year on the sidelines after being stabbed by his attackers.

He is also the owner of a 10-1 record and has fought for Russian promotion ACB. After the attempted kidnapping he was invited for an audience with the then president Mohammad Ashraf Ghani.

His career has not been without controversy. Last year he stopped Leonardo Barreto in the second round at TGFC 11 and afterwards the Brazilian admitted he had been so intimidated by the crowd in Kabul that he decided to quit in the second round.

Several fighters from Afghanistan have enjoyed success on the international stage. Siyar Bahadurzada signed for the UFC in 2012 and remained on the roster for seven years.

Bahadurzada was born in Kabul but he emigrated to The Netherlands at the age of 15. Another Afghan fighter currently on the UFC roster is Javid Basharat.

Basharat was born in Afghanistan but fled to the UK with his family when he was five. He earned his spot on the UFC roster after beating up an Israeli opponent who had called him a terrorist at Dana White’s Contender Series.

Basharat's having fun in there tonight 🎉

Also currently on the UFC roster is Nasrat Haqparast. He was born in Germany and has lived there all his life but his parents are both Afghan and he was frustrated after being told he was not allowed to represent Afghanistan using the country’s traditional flag.

Unlike the other three Hotak has lived in Afghanistan his entire life. He has spent the majority of his career competing there and has never lost a fight in Kabul.

But with the country now controlled by The Taliban there doesn’t seem to be any prospect of him fighting in Afghanistan again. He could follow in the footsteps of countryman Abdul Azim Badakhshi.

The Afghan featherweight is based in India and has emerged as one of the country’s top fighters. He is coming off a win at Matrix Fight Night 8 and has been able to compete regularly for the up and coming Indian promotion. 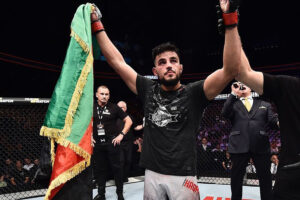 Nasrat Haqparast: ‘the Afghan flag is deep in my heart’! 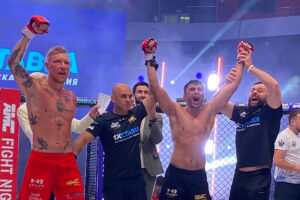 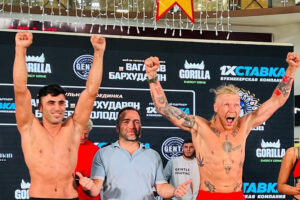