At ONE: â€˜Kings of Courageâ€™ in 2018 Xiong Jing Nan fought Tiffany Teo for the inaugural strawweight title. â€˜The Pandaâ€™ outclassed the Singaporean with her striking and the referee called a stop to the contest in the fourth round.

Neither fighter has lost a strawweight bout since. Xiong has successfully defended her belt three times, while Teo has put together two impressive wins over top contenders.

Xiong will be putting her belt on the line this Friday when Teo challenges her at ONE: ‘Inside the Matrix’. The Chinese champion thinks her opponent has improved since their first meeting,

“She beat Michelle Nicolini the BJJ world champion. She always performs very well, I think she will be on another level this time since she will be competing in her hometown. But I will try my best to defeat her. I want to let my fans see ‘Panda’ is always ready for a fight no matter what the situation.”

Despite never having lost in ONEâ€™s strawweight division, Xiong is coming into this one on the back of her first loss in more than four years. The 32-year-old was submitted in the dying seconds against atomweight queen Angela Lee as she failed in her attempt to become a double champ at ONE: â€˜Centuryâ€™ Part 1.

The loss snapped a nine fight winning streak. It was a setback for Xiong but there is no quit in her,

“I am a warrior who never gives up, and my fans and my family will always support me,” she said.

There will be a limited audience in attendance at the Singapore Indoor Stadium. 250 fans have been allowed to purchase tickets and the majority of them will probably be cheering for Teo.

Xiong is based in Singapore and fights out of Evolve MMA. But she knows the crowd will be behind her opponent and acknowledges that might have an affect on the outcome,

“This time she will be competing in her hometown, and there will be many people there to support her. So I think my energy from the audience might get affected.” 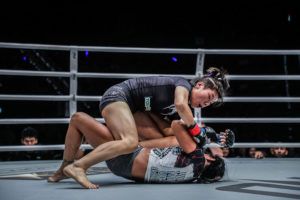 Having trained at Bali MMA for much of her ONE Championship career, Xiong made the switch to Evolve MMA at the start of the year. Due to the pandemic she admits that she hasnâ€™t been able to train as much as she might have liked,

“To be honest I was not training that well during the Covid-19 period and I didnâ€™t practice a lot but Singapore is a very nice place, I really enjoyed staying here and practicing my English at the same time.”

Her preparation has not been ideal due to Covid-19 but Xiong says she is always ready and it is a point the champion plans to prove on Friday,

“A win will prove that I’m always ready, things change but there is only one ‘Panda’ I will always do my best when I am in the cage, this is my stage. Iâ€™m ready.”