Yamato Nishikawa enhanced his reputation as one of the most exciting prospects in Asia with a first-round knockout victory against Ji Un Choi at Shooto on Sunday. The 19-year-old welterweight was headlining the event which took place in Sapporo.

The youngster came into the fight on the back of seven straight finishes and is coming off a stoppage win over Nobumitsu Osawa at Shooto 0516. Choi was competing for the first time on Japanese soil, and although he’s a year older than his opponent he came into the bout with far less pro experience.

Choi was the taller fighter and sought to use his range early on with a body kick. Nishikawa responded with a jab cross and a body kick of his own before shooting for the double leg. The Japanese fighter unleashed some punches before Choi landed a kick to the face with his hips raised. Nishikawa then passed guard and landed with an elbow. The Korean got back to his feet but was soon back on the canvas having seen his kick caught. The local boy then went for an arm lock before finding mount.

He soon capitalized with ground and pound and the punches rained down. A final flurry with the elbow and a big right hand brought a stop to the contest with the finish coming right on the 5:00 mark.

After the fight Nishikawa called out UFC veteran Kiichi Kunimoto and said he wants the fight to happen in Rizin. At 41, Kunimoto is more than double his age and is coming off of a decision loss to Daichi Abe at Rizin 34. 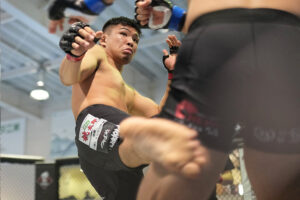 In the co-main event, there was a unanimous decision win for Miku Nakamura against Haruna Kato. The 30-year-old came close to finishing the fight with a crucifix in the third round, but Kato’s tenacity ensured that the bout went the distance. The victory extends Nakamura’s record to 6-6. 19-year-old Kato slips to 1-2.