The Ota City Gymnasium in Tokyo bore witness to Knockout’s latest installment of top level kickboxing cards. The organization has made bold and progressive moves to put on the best talent from Japan and overseas and this event featured the semi finals of the 2019 Asian Lightweight Tournament.

Yodlekpet Or Pitisak will meet Chang Hyung Lee in the 61.5kg tournament final after both won their opening round matches. In the main event the Korean took on the always entertaining Yosuke Morii.

Morii’s nickname is ‘Mr Knockout’ and he is known for his aggressive style with a record of 43 wins and 29 knockouts. However his approach is not without risk, he leaves himself open for counters and this proved to be his undoing against Chan Hyung. 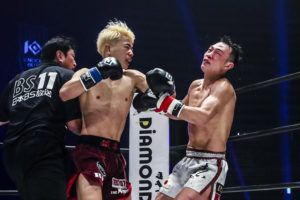 The Korean started at a high pace in the opening round and Morii didn’t pose him too many problems. In the second stanza jabs and elbows from the Japanese fighter started to land but he was knocked down by a right hook followed up with a stiff jab.

The second knockdown followed shortly with Chan Hyung landing a straight right and then dropping the local favourite with a left hook. Morii was on his feet but never looked steady and the Korean finished the fight with a flurry of punches which put the Japanese fighter down for the third and final time.

He will meet Yodlekpet in the final. The Thai fighter needed all three rounds to prevail against Altandulguun Boldbaatar but the Mongolian was totally outclassed by one of the top fighters on Bangkok’s ultra competitive stadium scene. 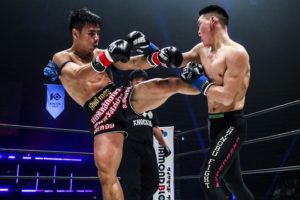 Yodlekpet gave a Muay Thai masterclass, his guard was virtually impenetrable and he was constantly stalking the Mongolian down. The Thai repeatedly slammed his shin into Boldbaatar’s thigh giving the judges a very easy decision.

Yodlekpet and Chang Hyung are set to face off on April 29th with the winner crowned the 2019 Knockout lightweight champion. It was also a good night for Lumpinee and Rajadamnern veterans Chadd Collins and Chokdee PKSaenchaigym who beat Fukashi Mizutani and Kazuki Osaki respectively.