Yusaku Kinoshita demanded a shot at the welterweight title after starching Akihiro Murayama in just 1.48 of round one at Pancrase 327 in Tokyo.

The 21-year-old is an exciting prospect. He racked up four straight finishes in his first four fights before succumbing to his first pro loss against Ryuichiro Sumimura at Rizin Trigger 1st last year.

The youngster was back to his best here against a far more experienced opponent. Murayama is twice his age and came into the bout with 43 pro fights under his belt. And as former King of Pancrase and Shooto Pacific Rim champion, the veteran represents a significant feather in Kinshita’s cap. 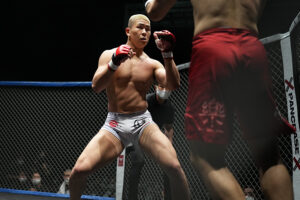 Murayama squandered the opportunity to win the interim belt on his last outing in October last year. The judoka came up short against Masayuki Kikuiri, a man he’d beaten the year prior but was handed a second chance here.

With the southpaw marching in to close the distance early in the contest, Murayama moved around to the back and wrapped up the body lock and wrestling Kinshita to the floor.  The younger man did well to escape the position before finding his feet.

The Osaka native wasted no time and cracked his opponent with a big punch. The blow left Muruyama folded and was swiftly followed up with some ground and pound. The win is arguably the biggest of Kinshita’s fledgling career and his fifth stoppage in six fights. His record now stands at 5-1 while Muruyama slides to 22-12-9. Keen to capitalize on his big moment, the bleach-blond starlet called his shot in his post-fight interview and said,

“”I’m Tsuruya, but I’m the most dangerous. I’m fighting against the world’s strongest players on behalf of Japanese MMA. Thank you everyone. Next is September, Tachikawa! 2nd floor, 3rd Let’s put it in with the floor full.” There was also a big win for teenage prospect Rei Tsuruya (4-0). The 19-year-old secured his fourth professional victory by submitting Taiki Akiba (11-11-1) in the first round.

While Tsuruya and Kinoshita are just starting out in the sport there was a decision win for a seasoned veteran. Yuki Kondo (63-38-9). The UFC veteran beat Kazuhito Suzuki (10-2) by unanimous decision.