Yuto Hokamura was expected to beat Kuya Ito at Rizin 29 but he probably wasn’t expecting a three round war. ‘Kintaro’ ultimately prevailed but says he was dealing with an injury throughout the fight,

“I couldn’t move the way I wanted to. About a month before the fight I shattered the ball of my big toe. It was quite concerning. I haven’t shown what I can really do.”

While that might have been a concern for Hokamura it probably made the fight more fun for the fans. Ito took some serious punishment but kept moving forwards and throwing attacking.

It was this unbreakable spirit that impressed ‘Kintaro’ the most,

“He has the ability to just suck it up and do things in tough situations. I think I’m better than him in all areas but a fight is kill or be killed and he had that strong determination.”

Hokamura was fighting near the top of the card and in front of his hometown fans in Osaka. He admits to feeling the weight of expectation,

“It would suck if I lost because I was the favourite. I felt pressure.” 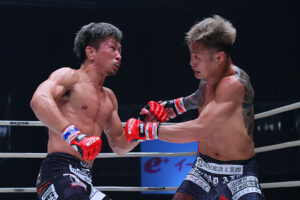 Heading into the contest he was not expecting a fast finish,

“The plan was to beat him up with strikes in the first round, get him tired in the second and finish him by KO or TKO That was the plan.”

But things did not go according to plan for Hokamura who briefly lost vision in his right eye during the second stanza, only regaining it in the break between rounds. This might explain why the Osaka native decided not to make it a striking match,

“I felt a bit uncomfortable striking with him so I turned it into an MMA fight. I have many weapons.” 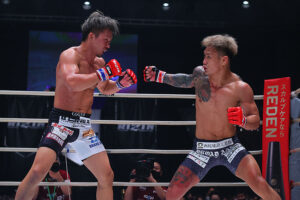 Hokamura threw everything except the kitchen sink at his opponent in the opening round and decided to switch strategy after realizing Ito must have an iron chin,

“Usually they go down, I was shocked he was standing. I realized he was a tough guy right there. I was aiming to finish the fight in the second round (but) he just wouldn’t go down.”

While Hokamura wasn’t able to find the finish on this occasion he still has a lot of confidence in his power. He faces Takafumi Otsuka in the quarter finals at Rizin 30 on September 19th.

Hokamura has been the distance in his last two fights. He hopes to book a spot in the semi finals in more violent fashion and will have a point to prove when he faces Otsuka,

“Out of all the guys who are left I’ve got the most devastating power. I am determined to show that in my next fight.” 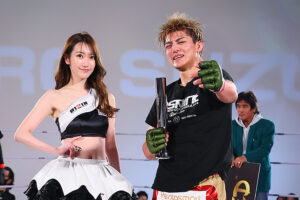