The welterweight landscape has changed beyond all recognition in the last six months. Ben Askren made his UFC debut last weekend while Yoshihiro Akiyama, Sage Northcutt and Georgiy Kichigin are all now on the ONE Championship roster.

It is the latter who challenges for the welterweight title at ONE: ‘Reign of Valor’ on Friday night and reigning champion Zebaztian Kadestam has huge respect for the promotional newcomer,

“Kichigin is dangerous. This guy is good (and) he has been doing well outside of ONE,” Kadestam said. The only man to ever beat Kadestam under the ONE Championship banner was Askren. The Swedish welterweight has been in with some good competition but knows he will need to put in a near perfect performance if he wants the win in Yangon,

“I can’t make any mistakes, not standing, not in the clinch, not on the ground. One punch or one mistake and things can change quickly.”

Kadestam is known for his Muay Thai. He has a habit of finishing opponents with head kicks but believes he is developing into a much more well rounded mixed martial artist, The 28 year old has beaten BJJ black belts before but one glance at Kichigin’s record tells him the type of challenge that awaits on Friday,

“I’ve faced the highest levels on the ground already (but) if you get 16 submission victories you’re definitely good on the ground so I cannot sleep on him.”

Kadestam really made his name while fighting out of the Legacy Gym. He claimed the PXC welterweight title and established himself as a major star in Asia but these days he is back in his native Sweden.

Kadestam credits his trainer there with masterminding his run to the ONE Championship title and says he has a specific gameplan for Kichigin,

“The game plan is up to my coach, Omar (Bouiche). He is the one analyzing everything to the smallest detail. I will just go in there, and if I’m doing something wrong, he will tell me.” 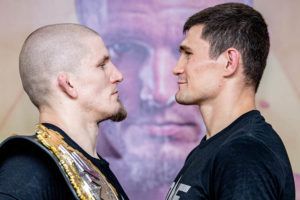 A reputation for striking prowess precedes Kadestam and ensures that the majority of opponents are going to try and take him down. He’s well aware of this and has been working hard on the other areas of his game,

“We’re on the right path, and I feel like it’s not going to take long for me to level up on the ground and in the wrestling.”

The two men came face to face for the first time this week. Kadestam already knew what Kichigin looked like so there were no surprises there and he is well of the welterweight signings ONE Championship has made,

“I looked him up right away as I like to have a face and a body type for when I visualize the fight. This whole year is going to be full of tough competition.” Mixed martial arts is not a simple sport. There are so many different elements to learn and a myriad of ways to lose but once the fight camp is complete the hard work is over.

Kadestam has prepared thoroughly and all that’s left to do is ensure he fights to his full potential on Friday,

“I just need to bring my A-game. I have this title, and I want to keep it forever.”