History tells us that when a fighter faces Ben Askren he will inevitably lose. Zebaztian Kadestam knows this better than most but he derives strength and solace from his sole defeat under the ONE Championship banner.

Kadestam challenges for the ONE welterweight title for the second time in Jakarta this Saturday. But having gone through the experience of facing Askren, other fighters no longer hold fear for the Swedish striking specialist.

“I feel like the Askren fight was my biggest fight, no fight can ever affect me as much as that one did. I got that out of my system, so when I went to fight Agilan in his hometown in the main event, I felt no pressure, and I just had a good time. Everything felt good.” Kadestam earned this title shot on the back of a stoppage win over Thani in Kuala Lumpur earlier this year. After the high stakes bout against Askren he says this felt like a pleasant change of pace,

“I was able to be relaxed and not really care about anything. He got me down, and it didn’t bother me. I got into a nice rhythm.”

On Saturday he faces Tyler McGuire. Like Askren, his opponent is American and undefeated but Kadestam is determined to dictate the course of the fight and give the audience something to cheer.

“I want to win fights and be as entertaining as I can be. That’s what I’m going to do. I’m going to put on a show for everyone.”

Before he signed with ONE Championship the Swedish fighter was known as a Muay Thai wrecking machine. With that sort of reputation preceding him, it’s no surprise that opponents are intent on taking him down.

Kadestam wants to showcase his striking skills at ONE: ‘Warrior’s Dream’ this weekend but doesn’t expect McGuire to make it easy for him.

“I think he’s going to use the same style as all of my previous opponents. He’s going to grind, and try and take me down. I’ve been training for these kinds of guys for so long, so I’m starting to get the hang of it.” 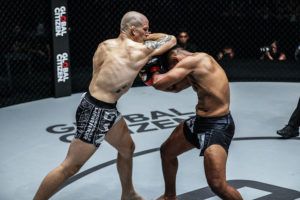 Ultimately the aim for Kadestam is to let his hands, shins, elbows and knees do the talking. He hopes to keep the fight standing so his Muay Thai can come to the fore and thinks sooner or later this is exactly what will happen.

“He’s a strong guy with good cardio. I think the first couple of rounds are going to be tough, but I think I need to shut his game down, and then let ‘The Bandit’ come out and play, just be myself and have a good time in there.”

Kadestam is no stranger to either main events or title fights. Four of his 14 bouts have had belts on the line. He’s tasted defeat and more than anything it has made him more determined to entertain.

“I’ve had a couple of losses, and my dream of becoming an undefeated world champion have kind of gone out the window, so I want to be the best I can be. But most of all, I want to entertain.”

It’s an interesting attitude, exciting even. Some fighters would adopt a safety-first, risk-averse strategy after a loss and approach a fight with the fear of defeat hanging over them.

For Kadestam the loss to Askren was a liberating experience. He knows he will never be under that kind of pressure or scrutiny again and is just determined to enjoy himself and to entertain.

That could be good news for the fans at Stadium Istora on Saturday and bad news for Tyler McGuire. ‘The Bandit’ is back and he’s determined to put on a show