Zhang Lipeng claimed arguably the biggest scalp of his career with a unanimous decision win against former ONE lightweight champion Eduard Folayang.

Folayang had gotten off to a strong start and unleashed some powerful leg kicks early on but Zhang moved in aggressively for the slam. He soon found the takedown and showed good aggression working from half guard.

The Chinese fighter landed some solid ground and pound from top position. Zhang’s aggression paid dividends as he worked his way to Folayang’s back. The veteran’s experience showed as he resisted the submission despite absorbing some powerful shots. Both men landed clean strikes at the start of the second stanza, but Zhang bided his time before blasting forward to land the double leg takedown. Folayang found his way back to the centre of the ring and scored with some powerful leg kicks. Zhang battled to get another takedown, but Folayang resisted.

The former champion fired more leg kicks in the third round and showed astute takedown defense. Zhang’s best shot was the right uppercut. He planted a neat check hook as Folayang was moving in,  proving that he could hang with the wushu master on the meet. He followed up with a spinning back kick, showcasing a good range to his arsenal.

Sensing the upper hand, Zhang secured a huge takedown to land in side control late on which was probably enough to secure the decision in what was a competitive encounter.

Former champion Alex Silva had an aggressive start to his clash with Miao Li Tao and came close to a first round finish. Miao had scored wins over Ryuto Sawada and Dejdamrong Sor Amnuaysirichoke and was framed as the ‘Evolve MMA killer’ in the lead-up to the fight.

That narrative lead Silva to speak about being extra motivated to buck the trend and the Brazilian might have ended the contest in the first round. Working off of his back, the 31-year-old locked up a deep armbar, but the Chinese fighter was able to stay on his feet and wriggle out of it.

Silva got the takedown early in the second and looked dominant, working his way into full mount, and softening his opponent up with punches. Transitioning to mount, Silva took Miao’s back and looked for the rear naked choke.

Finding no resolution, Silva soon tried again for the armbar, but Miao had done his homework and defended stoutly so see the end of the round. 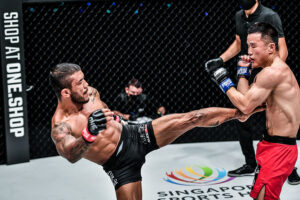 Silva got caught with some clean punches at the start of the third round after letting his hands drop. But ‘Little Rock’ came out on top in the scramble and took Miao’s back again. Miao appeared to be in danger from the choke once more but managed to find a way out.

Silva switched his attack and might have finished with a triangle. Silva may not have got the finish he was looking for, but his overall performance more than merited the unanimous decision. His record climbs to 10-6. Miao slips to 6-4.