Zhu Rong will be back in action on February 26th. The event does not have a name or a location but the Chinese lightweight knows who he will be fighting.

Rong (18-4) has been matched with Ignacio Bahamondes. The Chinese fighter is coming off the biggest win of his career, he finished Brandon Jenkins late in the third round at UFC Vegas 37.

Bahamondes (12-4) scored the first win of his UFC career in style last time out. He finished Roosevelt Roberts with a wheel kick at UFC Vegas 34, earning a $50,000 USD performance bonus in the process.

Both fighters signed for the UFC this year and have a 1-1 record. A second successive win for either man would move them a step closer to cracking the top 15 at 155lbs.

Also on the card is a strawweight fight between Rizin veteran Jinh Yu Frey (11-6) and Hannah Goldy (6-2). 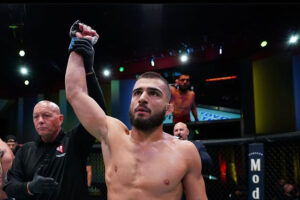