Seika Izawa only made her pro debut in October. But she has already earned a title shot and will be rematching strawweight champion Miki Motono at Deep-Jewels 32 next month.

The matchmakers were basically obliged to give Izawa a shot at the belt because she beat Motono in a non title bout at Deep-Jewels 31. She recently gave a far reaching interview to Sogo Kaku about her meteoric recent rise.

It is possible Motono might have underestimated her opponent last time out. Izawa expects the champion to be more assertive in the rematch,

“I think she will be more aggressive than last time. I’m also good at being aggressive and attacking so I think it will be an explosive fight, I’m looking forward to it.” 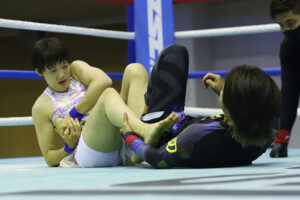 Izawa might seem like an overnight success having earned a title shot within six months of making her pro debut. But her journey to the belt began many years ago,

“I started judo when I was 4 years old. My mum wanted to stop my three brothers from fighting amongst themselves so she took us to a nearby Judo dojo. Thanks to my days practicing under my strict mum, I was able to take part in many national competitions and was able to finish third in the inter-high school tournament,” she told Sogo Kaku.

She would eventually take up wrestling because her parents thought it would help her progress in judo,

“When I was in fourth grade, my father took me to wrestling practice because someone told him that it would be good for strengthening my ground skills. When I went to try it out, it was fun so I started doing it and ended up winning the national tournament when I was a third year in junior high school.” She started training MMA in 2019 but didn’t decide to really switch focus until Covid-19 caused the cancellation of all her judo events,

“There were no judo tournaments because of Covid-19. I started thinking about whether I want to be a player or a coach (and) realized I still have a strong desire to work hard towards my goal so I decided to become a mixed martial artist.”

She has also spent time training and competing in sumo,

“I did sumo when I was a senior in college. Judo was over so I decided to try sumo, I practiced hard and as a result I was able to get second place in the national women’s tournament. I really enjoyed it a lot.”

The years training in judo, wrestling and sumo served her well in the first fight with Motono. Izawa was able to use her experience to take her opponent down,

“I practiced flowing from the ‘tackle’ to the takedown before the match so I was very happy that I was able to do what I practiced. She has a lot of power and fights with a lot of forward pressure. I didn’t really see many weaknesses.” 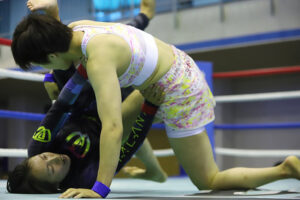 She once dreamed of representing Japan in the Olympics but put those ambitions on the backburner in order to study at university. Izawa now combines her competitive career with academic commitments but is fully focused on her goal of becoming a champion,

“I think that the Olympics are the top stage for judo and wrestling. However, I also had a strong desire to become a teacher so I wasn’t able to focus exclusively on them. Now as a MMA fighter I want to become the Deep-Jewels champion.”

It has been a fast track to a title shot for Izawa but the journey has not been an easy one. At Deep-Jewels 30 she scored a decision win over Mika Arai, an eight fight veteran who turned pro in 2017.

Her reward for that was a non title bout with the champion, who she also beat by decision. So Izawa earned her title shot the hard way and is delighted to see her MMA dreams being realized so rapidly,

“I will be the best fighter in the world. I’ve decided to become the Deep-Jewels 52kg champion so I was happy that I could fight the champion so quickly.”