At 23 years of age, Agilan Thani has grown up competing on one of the biggest stages in all of mixed martial arts for ONE Championship.

In only his seventh pro fight, Thani was facing off with former ONE welterweight champion Ben Askren. While he suffered a loss that night, it was a valuable lesson learned for his career going forward.

Thani didn’t suffer another defeat until his most recent fight against Zebaztian Kadestam, who then went on to win the vacant ONE welterweight championship just a couple of weeks ago.

As disappointing as that loss was for him, Thani says he learned a lot about himself that night and it will only make him a better fighter going forward.

“I learned quite a lot. I can only say one thing for sure, I was there 100% and Kadestam beat me fair and square,” Thani said ahead of his next contest at ONE: ‘Destiny of Champions’.

“I learned that I have to be patient with what I do in the cage. Not rush things and prepare 100% for a big fight.

“You learn more from a loss than you do from a win.” 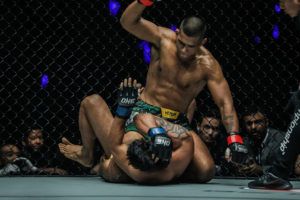 To get back on track, Thani faces Kyrgyzstan native Kiamrian Abbasov this Friday in the co-main event from his native Malaysia.

Abbasov only has a single fight in ONE Championship, a lopsided defeat to former title contender Luis ‘Sapo’ Santos, but overall holds a 18-4 record in his career.

While Thani admits he hasn’t seen that much of Abbasov outside of his lone appearance in ONE Championship, he saw a lot of flaws in his game that he hopes to expose when they clash this weekend.

“He only gets his opportunity when he sees someone is weak,” Thani explained when talking about Abbasov. “If the guy is strong and moving around a lot and being technical, he’s a bit lost. Even when he fought ‘Sapo’, he was completely lost and ‘Sapo’ was on a different level. This guy was just too scared to engage, too scared to do anything. Whenever ‘Sapo’ hit him, he got frustrated and wouldn’t move forward.”

“I’m not sure what he thinks about me. He probably underestimates me because I have a smaller record and less experience. I know he’s strong and I would say he’s wild. He’s very wild.” 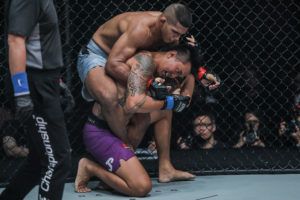 Thani has faced those kinds of wild opponents in the past, most recently when he took on Amitesh Chaubey back in March.

On that night, Chaubey was all over the place with his striking combinations while constantly taunting Thani, attempting to goad him into a stand up war. Thani didn’t bite and ended up submitting Chaubey in the second round with a Kimura.

Thani believes a similar fate could await Abbasov when they meet.

“I think the same thing I’ve got to do with Kiamrian. Just be calm and patient, although I feel he will try to take me down because most of his other fights come from ground finishes or submissions,” Thani said.

“Obviously the ground is my strength and the grappling department. I have a long way to work. I’m still a little bit down from where I want to be. I feel I have more ways to win but you never know. I’m just looking forward to put pressure in every aspect of this fight. That’s the key. Pressure. Some people break.” A win over Abbasov serves multiple goals when it comes to Thani’s career.

Immediately, Thani would have the chance to once again celebrate a victory in front of a home audience, which is always an electrifying moment for him.

More importantly, Thani knows beating Abbasov gets him back into the win column and puts him on course to hopefully challenge for the welterweight title in 2019.

With a new champion finally crowned in Kadestam, the rest of the welterweights finally have something to fight for again and he’s anxious for a chance at redemption as well as an opportunity to wrap that ONE Championship belt around his waist.

“I feel I have something to work for now,” Thani said about the ONE welterweight division. “There’s a champion now and the champion is somebody who beat me so it makes me want to work doubly hard. We are all moving towards a goal.”