Akihiro Murayama scored a decision win over Masayuki Kikuiri in the welterweight headliner of Pancrase 320, which took place on Sunday evening in Tokyo at Studio Coast.

The up and comer Kikuiri entered the matchup riding high with back to back victories over Kenta Takagi and Yuta Nakamura, two top contenders in the welterweight division. Although Murayama has been rocky in his last six outings, he proved that he still has aspirations of fighting for the title once again.

Both fighters started tentatively with countless feints and side to side movement. Murayama was the first to strike by clinching up around 90 seconds in and pressing his foe against the cage. Kikuiri was able to escape and get back to the centre but ate a clean right hand for his troubles. 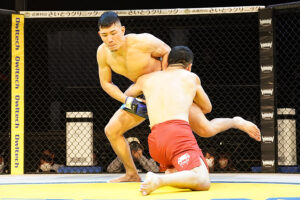 The action was limited but Murayama completed a single leg and landed some punches while Kikuiri tried to get back to his feet. The second round was a battle that played out in the clinch for the most part.

Kikuiri connected with the right hand early but his opponent was determined to lock up and fight along the fence. With multiple clinch exchanges that led nowhere for either fighter, it was extremely difficult to determine who had the edge in the middle round.

Reading the body language, Murayama entered the final round with a sense of urgency. The Gutsman representative blasted through with a takedown and made his opponent work tremendously hard to get back up. 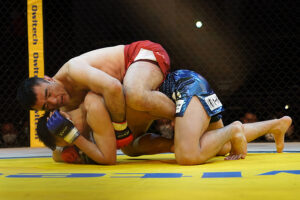 Once back to the feet, Kikuiri went on the offensive but was too aggressive and got tossed to the ground. Murayama scrambled to the mount and immediately took the back. The 25-year-old Kikuiri defended well against any submission attack and escaped.

Murayama executed a trip takedown yet was unable to initiate any punishment on the ground. The final exchanges were sloppy with most of the strikes barely grazing.

The 40-year-old former King of Pancrase Murayama (22-10-9) obtains his first consecutive wins since 2016 and calls for a title shot against the current King of Pancrase Hiroyuki Tetsuya. Kikuiri (6-2-1), on the other hand, tastes defeat for just the second time in his career. 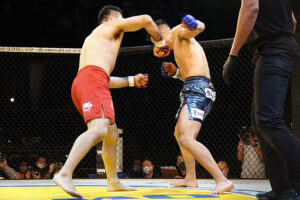 The co-main event between #1-ranked lightweight Kenichiro Togashi and streaking slugger Kosuke Kindaichi was a more action-packed affair and led to a major upset.

Kindaichi defeated the #1 ranked lightweight Togashi by split decision and extended his win streak to six a row while moving his record to 10-2-2. Meanwhile, Togashi has lost five out of his last six and drops to 19-16-5.