Akira Okada is making his featherweight debut at Pancrase 316. The 33 year old will be looking to turn his career around after some disappointing recent results.

He hasn’t been handed an easy matchup though. Okada is taking on reigning featherweight King of Pancrase Isao Kobayashi in Osaka next Friday, although the title won’t be on the line.

Okada says he had no hesitation in accepting a fight against the champion as his first featherweight assignment,

“I was due to fight a Brazilian earlier this year, but it got cancelled because of the coronavirus situation. So, when the question of my next match came up, Isao’s name was in the mix. All of a sudden, my new opponent is a champion, so I thought I’d just go for it. I thought I have to take this challenge.” 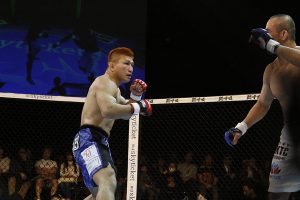 While Okada hasn’t fought since September he is well prepared for this bout,

“Because of the recent situation, I’ve not been able to fight but I’ve put in solid preparation so I’m looking forward to performing in front of everybody.”

If the weight cut goes according to plan he should have an advantage in terms of strength and power. Okada hopes this will be decisive if the fight goes to the floor,

“For this fight I’ve put a lot of effort into grappling. Isao is strong all round, so he doesn’t have any holes in his game. I’ve been training to bring out my strengths.”

A few eyebrows were raised when it was announced that Okada would be fighting at featherweight. But he has already cut down to 145lbs successfully once and is confident it won’t be an issue,

“The biggest change for me is dropping weight class. I want everyone to see how I move in this division. I spoke to a few people and made the weight cut once at the end of last year. Cutting to Lightweight wasn’t really that hard for me.”

In fact Okada says that cutting more weight will bring him in line with what most of his contemporaries are doing,

“I’m not that tall, so I was able to cut quite quickly. I’m finally making tough weight cuts like everyone else.”

Kobayashi is a veteran of 34 bouts. Okada has plenty of fight footage to review and says he knows exactly what to expect,

“I’ve watched Isao’s fights a few times. I reckon he thinks that if he does what he always does, he’ll win. Probably he won’t change his approach and he’ll come out as he always does. That’s where I have to surprise him.”

Okada’s loss to Yuki Okano at Road to ONE: ‘Century’ was his third defeat in a row. Its a disappointing run of form but despite the bad run of results he does not think Kobayashi will be underestimating him,

“He’s not the type to take things lightly. If he doesn’t take me seriously it’ll be a lucky night for me but he’s a two-weight-class champion, so I doubt it very much.” 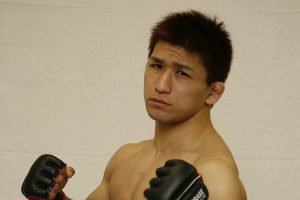 In fact Okada feels that his opponent’s mental strength poses as much of a problem as Kobayashi’s technical ability,

“He doesn’t waver. It’s difficult to break him down, both his skills and his willpower. He’s able to fight out of bad situations and turn things round.”

In fact the 31 year old believes that a boring fight will play in his opponent’s favour. So Okada wants to turn it into a wild brawl,

“Isao will be very calm and collected so it’s going to be all about how I can break his pace. I want to show the fans my wild side!” 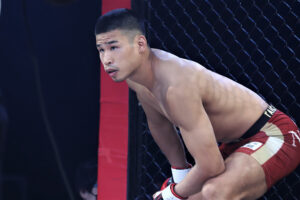