Alex Silva looking to regain lost momentum with ONE: ‘Dreams of Gold’ win

Alex Silva is starting to really feel a sense of urgency when it comes to his professional career as a mixed martial artist.

Once a champion in his division, the Brazilian strawweight is desperate to get back in the title picture but needs to snap a three fight losing skid first. At ONE: ‘Dreams of Gold’ he will have the opportunity to do just that against Indonesia’s Stefer Rahardian,

Silva knows a fourth straight defeat would leave him with a mountain to climb in order to get back in title contention. For the Brazilian this is the very definition of a ‘must win’ fight,

“I want to vie for the top prize in my weight class again. I want the belt back. In order to achieve that I need to build momentum with a huge win,” he said. The 36-year-old has struggled in his last three outings, starting with his split decision loss to Japanese rival Yoshitaka Naito in their May 2018 rematch, where he relinquished his possession of the ONE Championship strawweight belt.

Seven months later at ONE: ‘Destiny of Champions’ he dropped a unanimous decision to Yosuke Saruta, who went on to challenge and defeat Filipino standout Joshua Pacio for the title this past January.

A victory remained elusive for Silva when he yielded to Naito by way of unanimous decision in their rubber match at ONE: ‘Enter the Dragon’ last May,

“It was frustrating. After winning six-straight matches and the world title, now I’ve lost three consecutive bouts. It’s difficult because I am in a tough position.” Although his back is against the wall, Silva says this string of setbacks has only strengthened his desire to win,

“I’ve dealt with my recent setback like a real warrior. My desire is to win again. I will work hard to get the win this Friday in Bangkok,” he said.

However, Silva admitted that getting his hand raised in triumph on Friday will be no easy task as the opponent that stands in front of him is also hungry to get back on the winning track.

“I respect him. I know him from the time when we competed on the same card. He’s a nice guy. There is mutual respect between us, but I believe that I’m a better athlete than him in MMA. It’s going to be a good match. I need to get back to victory, and unfortunately for him, he happens to be in my way,” he said. 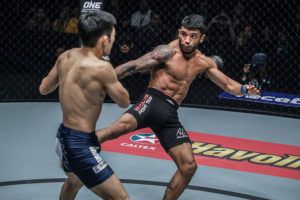 Silva is a BJJ black belt but also has some devastating leg kicks in his arsenal. He’s been working on every aspect of his game ahead of Friday nights fight in Bangkok,

“I had to improve all of my techniques, on offense and defense. Any time I am training, I need to be preparing, and ready, to be an all-around fighter. Before, my strong point was only grappling. I added striking. In this fight, those two aspects should work in harmony,” he said.

He may have reached the highest heights in ONE Championship, but Silva knows that this is really do or die if he wants to recapture that title,

“I don’t want to be complacent because I am not getting any younger. This is a huge organization with a lot of very good fighters from all over the world. I want to make my mark. This is my time to shine once more,” he said