Alex Volkanovski is training in Thailand. The reigning UFC featherweight champion is preparing for his lightweight title fight in Perth next month.

Volkanovski is preparing to face Islam Makhachev in the UFC 284 headliner. The event is set for February 12th and will see the Australian look to become one of just a handful of fighters to have held  titles with the promotion in two separate divisions.

The others are Conor McGregor, Amanda Nunes, Daniel Cormier, and Henry Cejudo. As Volkanovski looks to add his name to this exclusive list he has travelled to Thailand to team at Bang Tao Muay Thai in Phuket:

Volkanovski has been a regular visitor to Phuket and first got to know George and Frank Hickman when he was training at Tiger Muay Thai. Back then the Australian was a little known prospect competing on the regional scene.

Since then Volkanovski has gone on to establish himself as arguably the #1 pound for pound fighter on the planet. He has a 100% winning record since signing with the UFC and has basically cleared out the featherweight division.

Holloway’s last loss came all the way back in 2013. But he has not fought as a lightweight for nearly seven years so there are a lot of question marks hanging over the Australian ahead of UFC 284.

Volkanovski is not the only fighter in the photo who will be in action at UFC 284. Loma Lookboonmee is scheduled to face Elise Reed in a strawweight fight at UFC 284.

Loma, pictured on the right of Volkanovski, was originally booked to fight at UFC Seoul but the bout got shifted to Perth after that show was scrapped. Given that 40lbs separates them they probably won’t be training together much but her and Volkanovski can travel to Australia with the same team.

Volkanovski will be looking to become just the second fighter to hold the UFC featherweight and lightweight titles. The last man to do so was Conor McGregor but the Irishman never got to fight for a title in his homeland.

Volkanovski has the opportunity to claim that second title in front of the Australian fans. It looks set to be the biggest night of his career and he has decided that Phuket is the perfect place to prepare for it. 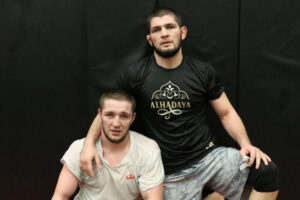