The bookmaker had Grasso coming in as the favorite and she proved them right with solid boxing and a mixture of combinations that Kim could not get a read on.

Although Kim was coming off a knockout win over Nadia Kassem at UFC Busan and entered with some momentum, it was Grasso who looked fantastic in her flyweight debut.

The ladies met in the center and started off with hard jabs and a lot of movement. Grasso was the aggressor and marched forward but Kim was able to land the right hand and counter with the left hook on multiple occasions. Toward the end of the round, the Mexican picked up the pace and landed more. Even though the right eye was showing some damage, she was able to turn the tide and never looked back after that.

The rest of the fight had Grasso being the more efficient and precise striker, connecting repeatedly with the overhand right and sharp jab had Kim all flustered and limited in her attacks.

Between the second and third rounds, Kim whispered to her corner that she was seeing double which implied there was an injury she obtained in the earlier exchanges. The Korean still came out for the final round and turned up the pace, trying to march Grasso down. 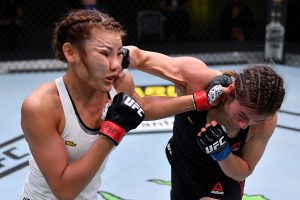 Even though Kim was having her best moments in the early part of the last round, the gas tank of Grasso did not wilt and she was able to use angles to avoid the most damaging shots.

They battled in the clinch halfway through. Just when it seemed Kim found a place to dominate, Grasso completed a sneaky trip and dragged the fight to the canvas. She worked all the way to the final bell and dropped down punches and elbows to seal the deal.

Kim loses her third unanimous decision with the UFC and drops to 9-3-2 overall. The South Korean has shown glimpses of being an elite fighter but this showing has clearly exposed her vulnerabilities.

Grasso, meanwhile, bounces back from a decision loss to Carla Esparza in her last outing and defeats the #14 ranked flyweight for the promotion. She elevates her record to 12-3 and by next week she should have a number next to her name.

The headliner had Aleksandar Rakic completely dominating Anthony Smith in a fight that most people did not expect.

The Austrian had his opponent hurt numerous times on the feet yet opted to go to the ground and sit on top. This strategy worked well and led to a unanimous decision on the scorecards after three rounds.

After the controversial decision loss to Volkan Oezdemir late last year, Rakic (13-2) comes back and displayed a different level to his game with this performance. Smith (33-16), on the other hand, loses his second straight and is winless in 2020.

In the co-main event, resurgent welterweight Neil Magny put together a flawless game plan and executed it to perfection leading to a unanimous decision victory over former champion Robbie Lawler.

Magny (24-7) has now won three in a row against mostly ranked competition and looks to be in the middle of his prime at 33 years old. Lawler (28-15), on the flip side, has lost his fourth straight and seems to be on the back end of his career.