Ali Al Qaisi and Jesse Arnett have been handed an immediate rematch. The two will face off for the second time at UAE Warriors 33 with the promotion’s featherweight belt on the line.

Arnett is the reigning champion. The Canadian claimed the title by stopping Al Qaisi at UAE Warriors 30 with the UFC veteran unable to continue after suffering a cut.

The two men will rematch at the Etihad Arena on September 17th in a fight that looks set to headline UAE Warriors 33:

Al Qaisi has been handed an immediate rematch. He will be looking to recapture a title which he held from 2021 until earlier this year when he was stopped by Arnett.

Arnett (20-8) has won three fights out of four for the promotion with his sole loss coming at the hands of Ray Borg at UAE Warriors 20. The Canadian has won two fights out of two in 2022.

Meanwhile Al Qaisi (12-6) saw a four fight losing streak snapped by the loss to Arnett. He has not lost a fight since being released by the UFC in 2020.

As has become customary the promotion will be putting on a double header with two events taking place on consecutive nights at the Etihad Arena. UAE Warriors 32 is set for September 16th and will be exclusively for African fighters.

Only one fight has been confirmed for this card. Kevin Oumar (8-3) faces Emilio Quissua (3-0) in a bout that will have the inaugural UAE Warriors Africa light heavyweight title on the line. 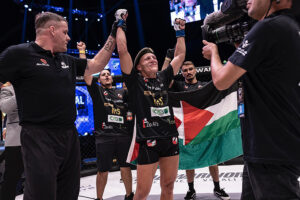