Ali Al Qaisi avenged his defeat to Jesse Arnett at UAE Warriors 33 on Saturday night. The Jordanian put his opponent to sleep with a guillotine choke in the third round to recapture the featherweight title.

The last time these two met was at UAE Warriors 30. The fight was stopped in the second round after Arnett opened up a nasty cut on Al Qaisi’s face with a barrage of ground and pound.

The rematch would also be settled on the mat but this time it was the UFC veteran who prevailed. Al Qaisi reacted furiously to the stoppage in the last fight and started the second match like he meant business. 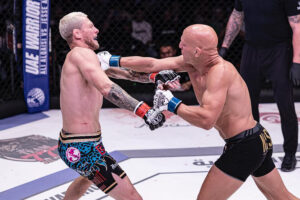 Al Qaisi dropped Arnett with a right hand early in the opening round and went to work with ground and pound. Arnett eventually worked his way out but it was the former champion who was in the ascendancy.

He found a home for his straight right hand against the Canadian southpaw in the second round too with all the action taking place on the feet. Al Qaisi was clearly ahead at this stage and Arnett came into the third knowing he needed something dramatic to turn the fight around. But Al Qaisi was in complete control with his constant feints leaving Arnett unable to time any counters. The Jordanian was scoring with straight rights and looping left hooks and even had time to showboat as he circled away from the completely static Canadian.

Arnett responded with a pair of takedown attempts but Al Qaisi was able to lock in a guillotine as he sprawled to defend the second one. Seconds later Arnett was asleep and the UFC veteran celebrated wildly.

The finish came at the 1:25 mark and sees Al Qaisi recapture the featherweight title and improve to 13-6. His opponent drops to 20-9.