Alyse Anderson wants to prove she belongs at ONE: ‘Empower’

When the lineup for the ONE Championship atomweight Grand Prix was announced there were seven names that would already be familiar to fight fans in Asia. Alyse Anderson was the odd one out and the American will have a point to prove when she faces Itsuki Hirata in the quarter final.

That match takes place at ONE: ‘Empower’ on May 28th and Anderson wants to make a big impression on what will be her promotional debut,

“They (fight fans) might not know a lot about me so I just want to prove I belong at this level. I want to prove that I’m the best and I have the ability to win the Grand Prix and fight for the title,” she said. Anderson holds a 5-1 record and has fought three times for Invicta FC, with her only loss coming by way of split decision. But the 26 year old sees this tournament as her ticket into the big time,

“I’m really just taking one fight at a time but it’s the most exciting thing that has happened in my MMA career. It has really brought my training to the next level. I’m honoured and I don’t want to let this opportunity slip.”

Standing in her way is Hirata who is undefeated and has won three out of three for ONE Championship. Anderson has watched her opponent’s previous fights and is happy to head into this contest as something of an unknown quality,

“I watched (her) fights she has been successful, she’s got a good ground game, she is strong, well rounded. It will be a challenge (but) no-one really knows who I am yet and this is a great chance to show my abilities and show all the fans my strengths.” 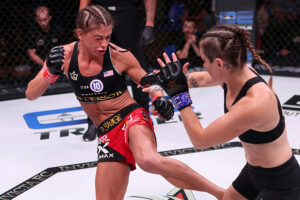 The only other fighter in the tournament without previous ONE Championship experience is former Rizin super atomweight champion Seo Hee Ham. The Korean also held the Road FC atomweight champion and had fought for the UFC so arrives with a big reputation.

By contrast Anderson’s name was not on anyone’s radar, at least in Asia, but she believes she can make an impact in this tournament,

Anderson made her amateur debut in 2013 and was undefeated before turning pro. She says she is ‘well rounded’ and has background in some Japanese martial arts,

“I’m tall for this division My reach is an advantage but I also love jiu jitsu and one of my wins was by flying triangle and I have a karate background so I feel like I’m well rounded.” 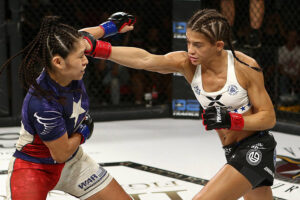 The 26 year old put together an impressive 5-1 record without being able to focus full time on her fighting career. That has all changed and she moved to Miami to dedicate herself to the sport in preparation for this tournament,

“I recently moved to Miami to train full time at MMA Masters. This will be a great camp because it’s the first time I’ve got to dedicate my whole life to training and just been able to focus on this (fight).”

Hirata has a background in judo but Anderson is adamant that she will be able to take the fight down herself if she needs to,

“If it goes to the ground then I feel comfortable, you know she’s got a judo background and is maybe looking for her throws (but) I’ve also faced pretty good competition and I’ve been able to get it to the ground every fight when I’ve wanted to.”

Anderson is expecting a challenge but she is ready for it. The winner of the fight between Meng Bo and Ritu Phogat awaits in the semi final and the American is determined to prove she belongs with the division’s elite,

“It’s going to be a step up in competition but I’m always ready for the challenge. I know they are going to be tough fights, these girls are well rounded, they are the best atomweights in the world and I’m excited to prove that I belong here and I belong in one with these girls.” 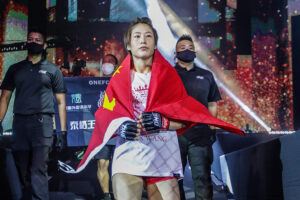 Meng Bo has shaved her head and is ready for war