Amir Aliakbari is chilling out!

Amir Aliakbari is chilling out. No, seriously the Iranian heavyweight looks like he must be cold in the latest pics posted on his Instagram.

He is currently training in Moscow and somebody really ought to tell him to wear a coat. Or at least some clothes:

Aliakbari has been training with Alexander Volkov. The Russian heavyweight is set to face Tom Aspinall at UFC Fight Night 204 next month and appears to have enlisted the help of the Iranian.

Volkov is currently ranked #5 while his opponent is #10 meaning that a win would thrust the Russian into title contention. ONE Championship doesn’t currently have heavyweight rankings but having been knocked out in the opening round of both his fights for the promotion Aliakbari is a long way from a title shot.

But working with one of the best heavyweights in the world won’t do Aliakbari any harm at all. Sitting around half naked in the snow might though, we hope he doesn’t catch a cold! 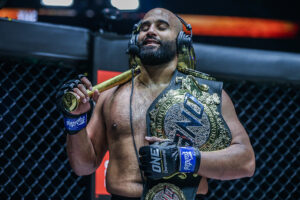