Amir Aliakbari is rated as one of the world’s best heavyweight prospects for a reason. The Iranian is a decorated wrestler who holds a professional record of 10-1 and has spent much of his career training and competing in Asia.

Aliakbari looks set to spend more time fighting in this continent after signing with ONE Championship. He already has his sights set on the heavyweight champion,

“All I know in life is winning gold. It’s why I’m coming to ONE,  to become the best in the world, the ONE champion. Brandon Vera is a great champion who’s been around for a long time, but I am on a different level.” Aliakbari is a decade younger than Vera and thinks he could finish the career of the UFC veteran,

“After he fights with me, I will give him doubts whether he wants to fight again. Nothing disrespectful, but I just believe I am the best. I am a different breed.“

He was signed by the UFC last year but the deal was nixed due to US sanctions against Iran. Aliakbari has fought for Full Metal Dojo, Rizin and ACB and says he wasn’t short of offers,

“I had some offers from different promotions but ONE reminds me of the Olympic Games, it’s a spectacle. I have some friends who’ve fought there and they gave me some very good reviews on the way they were treated.”

Aliakbari has spent a lot of time training at AKA Thailand in Phuket. But he is in his homeland at present and wants to fight as soon as the border restrictions are eased,

“I am based in Iran but I’m ready to fight in the next four weeks, I understand the border is closed right now, but I want to show the entire world the real ‘Iron Sheik’.”

His last three bouts took place under the ACB banner. But Aliakbari has fought seven times in Japan and once in Thailand winning all but one of those fights. 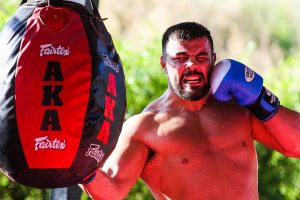 He really burst onto the international scene with Rizin, reaching the final of the Openweight Grand Prix. Aliakbari has very fond memories of his time fighting in Asia,

“Asia has the best fans in the world, they are very classy and respectful of the sport. This is one of the reasons I want to fight for ONE, because of the reception by the Asian people. They treat fighters better than anywhere else in the world.”

Aliakbari has not fought in nearly 18 months after seeing his UFC career nixed by US sanctions and his   country hit hard by Covid-19. But the lay-off has certainly not dented his confidence and the Iranian has a point to prove,

“I believe I am the best heavyweight in the world today and I will prove it.”

Arjan Bhullar runs the rule over the ONE Championship heavyweight contenders