It has been a difficult year for Aung La Nsang. He lost his light heavyweight title and has been affected by the ongoing unrest in his native Myanmar.

But Friday was a good day for the 36 year old who knocked out Leandro Ataides at ONE: ‘Battleground’. As always the win was well received by the Burmese fans who are very vocal on social media.

There was no audience at the Singapore Indoor Stadium but La Nsang was grateful for the support he receives from Myanmar,

“I’m not a political figure, I’m a nobody, I’m just a husband, a dad, a mixed martial artist and to get people supporting me means a lot. I hope during these hard times it gives them some sort of happiness.” 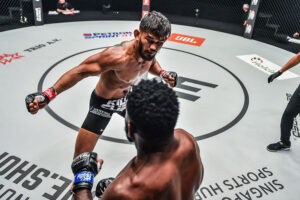 He admitted that the situation in his homeland, where a military junta has seized power and is brutally crushing protests, was a major concern,

“There’s always a lot riding on my fights. I don’t just fight for myself, I fight for my family and my people back home and it’s been a rough year for all of us. During training camp I would have days when I broke down because of what is going on in my country but adversity is what makes you better and tonight I was able to reap what I sow.”

La Nsang could have been forgiven for fearing the worst when he was taken down by Ataides early in the first round. But the Sanford MMA representative says he was able to remain cool and collected throughout,

“I know how well I do in the gym with top tier athletes. Preparation is what made me not freak out or not worry about the takedown.” He lost his titles after being repeatedly taken down by the 6’4″ Reinier de Ridder bur says Ataides was a much easier opponent to prepare for,

“I have great training partners, who are similar build to Leandro. These guys really helped me out for this camp.”

In terms of what comes next La Nsang made it clear he was open to fighting anybody,

“When I was champion (Kiamrian) Abbasov called me out and (Yushin) Okami wants a shot at me too. Lets do it, lets make these fights happen. I’m down for anyone and anybody that deserves it.” This was La Nsang’s first time competing in a three round fight since 2017. He is used to preparing for five rounders and says he feels fresh enough to get back in training camp next week,

“Three rounds is nothing to me. I can do it again in a month.”

He is hoping to be back in action in just over a month. ONE Championship’s tenth year anniversary is coming up in September and La Nsang is hoping to feature on the fight card put together to commemorate that occasion,

“I didn’t take any damage and I spar hard so I don’t feel these fights are a lot harder than sparring at Sanford. Put me on that ten year anniversary card. I’m down for it.”