Kevin Belingon working on his weaknesses ahead of ONE: ‘A New Era’

Kevin Belingon’s split decision win over Bibiano Fernandes was controversial. It earned him the ONE Championship bantamweight title but the judges decision wasn’t met with widespread approval.

Regardless, Belingon earned the right to call himself a champion. But as he prepares to face Fernandes for the third time at ONE: ‘A New Era’ the Filipino knows there is still plenty of work to do,

“I am still hungry to compete (and) I think I still need to improve my wrestling and grappling,” he said. 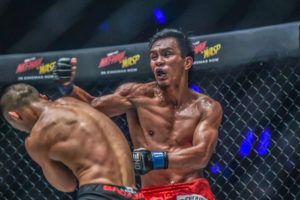 Team Lakay has been very successful in recent years with Belingon’s team mates Eduard Folayang, Geje Eustaquio and Joshua Pacio all capturing ONE Championship titles. However all four have experienced ups and downs.

Belingon, Folayang and Eustaquio all fought on the first ever ONE Championship event at the MOA Arena and all three lost. Pacio is coming off a defeat too and the newly crowned bantamweight champion says there is no question of complacency creeping in,

“We just want to prove that we can compete on the highest level of competition. I need to train even harder so that I will always be ready whenever I defend my title,” he said.

He first fought Fernandes in 2016 and Belingon was submitted in the opening round. Their second fight lasted a full 25 minutes which is evidence of how much the 31 year old had improved in the intervening years. 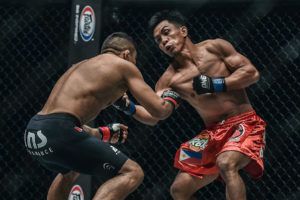 The Filipino knows all about his opponent’s strengths and weaknesses and has prepared accordingly,

“I need to watch out for his wrestling and submission attempts. If there is an opportunity for me to knock him out, I will not hesitate to grab it.”

It is ONE Championship’s first ever card in Tokyo and the promotion has pulled out all the stops with four titles fights and the likes of Demetrious Johnson, Eddie Alvarez and Yodsaenklai Fairtex all in action on March 31st.

Belingon is never short of motivation but knows his 17th ONE Championship fight will be a little bit special,

“I’m very excited to compete in Japan and I’m especially excited because it will be my first time in the country. It’s an honor to be part of this historic event, and I think being in this position in a huge event like this will help increase the popularity of mixed martial arts in the Philippines.” 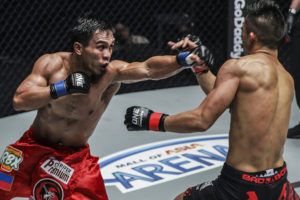 The key to Belingon’s sustained success has been a disciplined approach. It has helped him make the transition from being a star on the local scene in the Philippines to becoming a champion with Asia’s foremost MMA promotion,

“Discipline is important for a martial artist because it is his main weapon, my parents and Coach Mark (Sangiao) taught me the value of discipline. If you don’t have it, you won’t reach your full potential.”

There will be plenty of Filipinos tuning in to watch Belingon and Folayang defend their titles in Tokyo next Sunday night. They are the last remaining ONE Championship title holders from the Philippines and the bantamweight champion does not want to see his country’s current reign come to an end,

“I am proud to be one of those representing the country in this grand stage.”

Team Lakay flyweight Danny Kingad is also competing in Tokyo while former strawweight champion Joshua Pacio is fighting at ONE: ‘Roots of Honor’ a few weeks later. Belingon believes having so many training partners preparing for upcoming bouts gives the Baguio based fighters an edge,

“We train together and we share our ideas with each other, especially when it comes to preparing for upcoming bouts because we all want to win,” he said.

While winning is foremost on Belingon’s mind he is well aware of the controversy surrounding the outcome of his last fight. So he wants to retain the belt and dispel some of the doubts in the process,

Fernandes hasn’t been stopped since 2006. But then he hadn’t lost a fight in eight years before Belingon beat him and the Filipino is in the mood to cast another of his opponent’s records into the annals of history.