From the moment she put pen to paper with ONE Championship, striking ace Bi Nguyen has had her sights set on being part of the promotion’s first foray into Vietnam.

That ambition will be realized when ONE: ‘Immortal Triumph’ takes place in Ho Chi Minh on Friday, marking the burgeoning organisation’s debut in Nguyen’s homeland. The 29-year-old’s atomweight Muay Thai bout against feisty Indian Puja Tomar will be the main attraction for many in attendance,

“Ever since I signed with ONE and realized that this might be a possibility I’ve been looking forward to it. I’m thrilled.”

‘Killer Bi’ was born and raised in rural Vietnam, before her family uprooted and made their way to the U.S. in search of a brighter future. She’s only returned once since their move, and Nguyen sees this as an ideal opportunity to reconnect with her heritage and her culture, which she still holds dear to her heart. 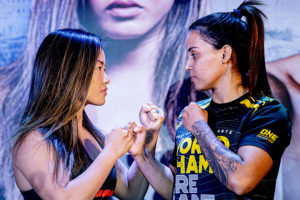 There’ll be an undeniable sense of sentimentality for Nguyen when she sets foot in ‘The Land of the Blue Dragon’,

It’s a lot to process, particularly when you also have to stay focused on the impending battle inside the ring. Nguyen confesses she’s still coming to terms with the entire situation,

“Honestly, I’m a little overwhelmed. I’m very excited and pumped, but I’m a little overwhelmed.I think that it hasn’t really hit me yet and it probably won’t until I land and step foot on the soil, hear my language and see my people.Â  So I hope that when I land in Vietnam I’ll have a chance to sit down and let it really sink in. I think I’ll probably get very emotional.”

Nguyen also has a point to prove inside the ring too. In her last bout at ONE: ‘Masters of Destiny’ in Kuala Lumpur in July, she thought she had clinched her second consecutive victory against the always game Bozhena Antoniyar but the scorecards went in her opponent’s favour.

Nugyen accepted the loss in her typically gracious fashion. While she says the result still stings, she walked away from the experience with a new-found belief in her abilities,

“I was confused as the rest when she won the fight but much respect to her,” she said.

“I still don’t know what to make of it. I really think I won that fight but I don’t want to dwell on it, nor do I want to take anything away from my opponent. I think it was a hell of a fight that we both put on. When I dropped her in the first round that was quite an empowering moment for me (because) I realized my stand up is at a very elite level.”

It’s only added more fuel to Nguyen’s fire, and it will be Tomar who’ll likely bear the brunt of that backlash this weekend in their strictly Muay Thai duel.

Nugyen actually started out as a Muay Thai fighter. She subsequently developed a passion for MMA but the rules and regulations in Vietnam have opened up an unexpected opportunity to return to her fighting roots 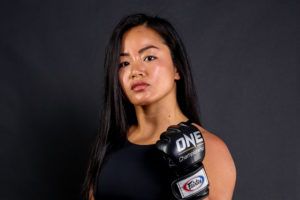 The opportunity to compete in the country of her birth was too good to turn down and Nguyen is embracing the Muay Thai game again,

“I just love to compete but honestly MMA (is) where I want to focus my career. It’s more of a mind game, more of a chess game with more pieces to deal with, more moves they can make on you and that’s thrilling for me.”

Given the choice she would have preferred to compete in MMA but Nguyen wasn’t going to pass up the opportunity to fight in Vietnam,

“I’ve never really enjoyed going back and forth because I really like to put my all into something and doing a full Muay Thai camp does take away from your progression in MMA. But I knew I needed to be on this card and I would’ve fought anyone just to compete in my country.”

As for solving the Tomar puzzle, Nguyen feels she has a more diverse striking arsenal than her opponent,

“I know she has power punches. I’ve watched a few of her fights and she definitely relies on those a lot. What I’ll have to look out for is the power in her looping hooks. I’m going to use the diversity of my strikes and my footwork to get on top.”

Determined to return to the winner’s circle in her native Vietnam, Nguyen will carry an extra sense of responsibility with her in Ho Chi Minh,

“I’m usually very chilled and relaxed but for this fight I feel a sense of pride and that’s making me a lot more aggressive than usual. You’re not going to pass me on my home soil. Defending my land, my pride, and my people. I’m going to go for the kill, go for the finish.”

Despite having had a difficult relationship with her late father Nguyen feels she will be inspired by his presence on fight night,

“It’s crazy we had an estranged relationship when he was alive and after he passed away, spiritually, I’ve never felt closer to my dad. Every fight since then I can see him looking down on me. I just feel very spiritually connected with him, and I can imagine how much more connected I’ll feel when I’m in Vietnam.