For Bibiano Fernandes the next assignment looks a tough one. For one he has been out of action for over two years and for two he is facing perhaps the deadliest striker in the division.

Few fighters would relish the prospect of facing John Lineker let alone going toe to toe with the stand up specialist. But that is exactly what Fernandes plans to do at ONE: ‘Bad Blood’ this Friday,

“I’m ready to strike with anyone. I trained a lot for this fight, brought some tough sparring partners to my camp to sharpen my striking, and I’m ready for wherever the fight unfolds. I’m definitely going to have to do some striking with him because that’s his style. I won’t be intimidated by his hands, though. Let’s go to war.” 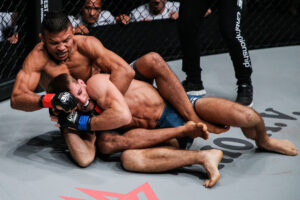 The two Brazilians have been engaged in a war of words but Fernandes is adamant there is no bad blood on his side,

“There’s no rivalry. I have nothing against him. He is the one who wanted to create something that didn’t exist. I’m a professional, I’m there to fight.”

Interestingly Fernandes claims that Lineker reached out to him to try and build his fanbase in Asia,

“He kept texting me all the time. He was trying to promote himself and couldn’t.”

Fernandes sees some weaknesses in Lineker’s game but won’t divulge what they are. He does, however, acknowledge his opponent’s undeniable strengths,

“I’m just going to talk about his strengths. He has a good low kick, a good guillotine, has very good hands, and hits hard. The weaknesses I won’t reveal because I will exploit them in the fight.” 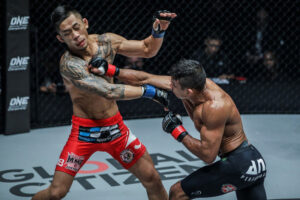 Lineker claimed in an earlier interview that Fernandes’ heyday was over. But the champion is adamant he has stood the test of time and points out that this will be his 12th time defending the bantamweight belt,

“In relation to my heyday being over, it all depends on how the athlete takes care of the body, mind, and diet. All I know is that I’m going to make my 12th world title defense.”

For the first time in his ONE Championship career Fernandes comes into a contest as the underdog. But he thinks there will be tangible benefits to fighting a confident opponent and does not expect Lineker to run,

” I think this fight doesn’t go to five rounds. I believe that we will (start) cautiously at the beginning, analyzing what each other can offer. But he’s a strong, explosive guy, who comes forward all the time, and I like that because most of the opponents I faced were always retreating. So, it will be a cool fight for me.”

John Lineker: ‘Ill knock Bibiano Fernandes out by the second round’!