The event that Bibiano Fernandes and John Lineker are headlining is called ONE: ‘Bad Blood’. It is an appropriate title but the latter blames his opponent for turning a regular title fight into a grudge match,

Lineker, who was one of the top ranked flyweights in the UFC before signing with ONE Championship is struggling to understand his opponent’s attitude,

“I wrote that I wanted the opportunity to fight for the title, that it was past time, that I was ready, and that it was my moment. And then he got offended and replied, saying that I wasn’t a professional.” 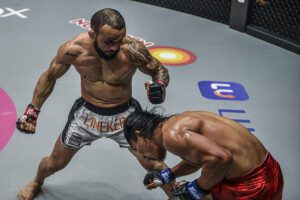 Fernandes has dominated ONE Championship’s bantamweight division for a decade. But Lineker believes the 41 year old is past his prime,

“Bibiano has been out of action for some time, I believe his heyday is over. Today, I don’t see him at his peak, mainly because of the time he was away.”

The two Brazilians might share a culture, a language and a job. But they don’t seem to have found any common ground in the buildup to this fight and Lineker feels his opponent has an outdated attitude,

“Bibiano saying he would fight me even on the street is a delinquent attitude. MMA has evolved a lot. In the old days, there was a lot of this thing but today, MMA is a professional sport. I’m not a delinquent. I get in the ring to fight for my family, for myself, and for the sport.”

Lineker has forged a reputation for himself as one of the hardest hitters in the lower divisions. He was one of the top flyweights on the UFC roster but was released by the promotion due to his inability to make 125lbs.

He has had no issues since signing for ONE Championship and moving up to bantamweight. This will be Fernandes’ first time facing a fellow Brazilian since 2012 and Lineker warns that the champion faces a totally different type of challenge in Singapore next Friday,

“This is my moment, and I believe he’s never fought a guy like me. I’m an aggressive guy who never backs down, who walks forward all the time, and has very heavy hands.”