In 2007 Bibiano Fernandes fought in Japan for the first time. Within the next four years he would win the Dream featherweight title and the Dream bantamweight title in the same country.

Fernandes wasn’t handed those title shots. He had to go through a four round tournament process before earning the first and beat three separate opponents to win the second, a title he technically still holds today.

So the Brazilian has a bit of history in Japan. And he hopes to add another chapter by regaining his ONE Championship bantamweight title on Sunday. Fernandes doesn’t feel he deserved to lose it, but he’s desperate to get it back from Kevin Belingon,

“I beat him one time, and I beat him the second time (but) I really want to get the belt back.”

The first win was emphatic, a quick fire submission. The second match ended in a split decision victory to Belingon and the decision still rankles with Fernandes who, for the time being at least, has been stripped of his champion status,

“When I watch the fight, it’s a close fight but I won. His strength was supposed to be this power punch. He knocks everybody out, but he punched and ran with me because he didn’t want me to take him down.”

While Fernandes was surprised by the decision he is not suffering from delusions of grandeur. Despite a stunning list of achievements and a huge collection of silverware he remains surprisingly humble,

“I am never the best. I always have something to improve. The moment I think I am the best in the world is the moment I fall. It does not matter who I am or who it is, the moment you think you know everything, you do not have space to improve any more.” 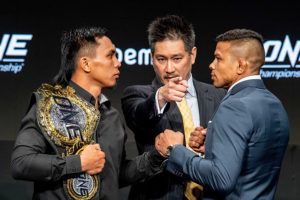 Japanese fans know all about Fernandes. He might come into this bantamweight title bout at ONE: ‘A New Era’ as the challenger but he certainly won’t be an underdog. The Brazilian is hoping to roll back the years and remind the crowd at the Ryogoku Kokugikan exactly why he became such a big star in their country,

“I want to show the true champion here. That’s my mentality.”

Fernandes has won two titles in Japan so far. He might have already spent several years as the ONE Champiomship bantamweight champion, but the Brazilian would love nothing more than to win a third on Sunday.