At ONE: ‘Big Bang’ on Friday Bokang Masunyane will be looking to extend his undefeated record at the expense of former title challenger Rene Catalan. The South African is taking on the #3 ranked strawweight and feels this fight could be his fast track to a title shot,

“I’ve always said ‘give me the best and toughest guys’ and Catalan is top three in the division. He has the experience and he is a veteran. I know that beating him will be a big achievement for me and put me closer to the title.”

In his last fight Masunyane took on Ryuto Sawada. It turned out to be a one sided contest with the charismatic South African dominating from start to finish at ONE: ‘Mark of Greatness’.

The Pancrase and EFC veteran looked extremely comfortable but says he was impressed by the Japanese fighter’s ability inside the cage,

“It was one of the toughest fights I’ve had. I know the guys in Asia have great stand-up and Sawada’s ground game really surprised me but I believe my skill set also stood out,” he said. Catalan is coming off an unsuccessful title shot but remains #3 in the rankings. Masunyane has plenty of respect for the Filipino but is extremely confident heading into their fight at the Singapore Indoor Stadium,

“Unfortunately for Rene Catalan, he is the guy that is in my path, so I just need to eliminate him to get to the title shot. He has some good skills, but to be honest, I am never worried about any of my opponents.”

Masunyane admits to having reviewed some footage of the multiple time wushu world champion but says there is no-one at strawweight capable of beating him,

“I have watched some of the videos to see what he is good at, but I do not feel threatened by anyone in the division, not just Rene Catalan.”

His ONE Championship career is in its infancy but Masunyane’s 7-0 record speaks for itself. He is a seasoned wrestler who is coming off back to back decision wins over more experienced Japanese opponents.

Japanese fighters Yosuke Saruta and Yoshitaka Naito are currently ranked #1 and #2 respectively but Masunyane maintains that he is the man to beat,

“As much as I respect everyone in my division, I think I am the toughest fight for anyone. I showed my will to win in my debut. Whoever fights against me is going to have it tough.” 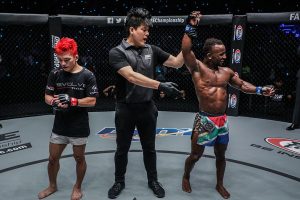 Masunyane feels that he is the best and it is a point no opponent has been able to successfully argue. Catalan has a few losses on his record but the Filipino has been in with both current champion Joshua Pacio and former champions Yoshitaka Naito and Dejdamrong Sor Amnuaysirichoke.

Those are the type of tests that potentially await Masunyane and it is safe to say the South African feels ready for them. He sees Catalan as a stepping stone and this Friday as the perfect opportunity to establish his title credentials,

“I feel like I am something special and I am going through the whole division to become the champion. I respect him but he has never fought somebody like me and I am going to dominate him from the get-go until the end of the fight.”