After closing out his trilogy with Brazilian arch-nemesis Alex Silva on a triumphant note, former ONE Championship strawweight titlist Yoshitaka Naito wants to so the same with reigning champion Joshua Pacio.

The 36-year-old is coming off a busy 2019. Following his shocking first-round knockout loss to Rene Catalan in March, he bounced back with a pair of comfortable decision wins.

Naito easily outpointed Silva in their rubber match at ONE: ‘Enter The Dragon’. He then scored another lopsided decision victory over Pongsiri Mitsatit at ONE: ‘Masters Of Fate’.

The Japanese fighter was surprised to be overlooked for a title shot at ONE: ‘Fire & Fury’ when Silva got the chance to challenge Pacio,

“If you are going to ask me, yes, I think I should get the title shot in my next fight. I won my last two fights. The contenders above me in the division already got their chance at the title. That makes me next in line,” he shared in his native tongue. Naito was clearly referring to Catalan and Silva who unsuccessfully challenged Pacio for the strawweight title.

Catalan’s six-fight winning streak came to an abrupt end when he was submitted by Pacio at ONE: ‘Masters of Fate’. Naito believes he is next in line and is hoping for a trilogy fight with the Filipino,

“I think Joshua Pacio and I should finally settle it once and for all. I know him, and he knows me. I won against him. He also won against me. We are tied at 1-1. Let’s break the tie,” he stated.

Both men initially met each other in October 2016 at ONE: ‘State Of Warriors’ where Naito pushed himself to the limit in order to pull off a come-from-behind submission in the third round to beat Pacio and retain the strawweight crown. They squared off against each other again two years later at ONE: ‘Conquest Of Heroes’ but this time around, Pacio tied the series and walked away with the victory and the title by way of unanimous decision.

“I knew the first time we fought that he would be a champion someday. He keeps on improving. He is still young, and I know he will get stronger as he progresses in this sport,” Naito said of his rival.

While he acknowledges Pacio’s growth as a competitor Naito believes that he has also improved,

“I think I will create problems when we meet again. Even at this age, I am still improving. I am still learning new things,” he stressed. 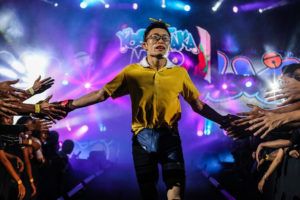 Though his sights are fixed on a third date with Pacio, Naito does not mind taking a detour in order to prove his worth. ONE Warrior Series alumnus Lito Adiwang recently called out the former champion.

Both men are coming off wins over Mitsatit, although Adiwang did it in slightly more impressive style. Naito would not be averse to taking on one of Pacio’s Team Lakay training partners if it led directly to a title shot,

“I am willing to face anyone as long as it will lead me back to the title. There are a lot of hungry warriors in my division. They are welcome to try.”