Bruno Machado will be making the first defence of his lightweight belt at UAE Warriors 15 on Friday. The action takes place at the Jiu Jitsu Arena in Abu Dhabi and the Brazilian will be taking on Mickael Lebout.

Machado has never lost a fight in his adopted home of Abu Dhabi. The BJJ black belt has won four out of four and it is a streak he is determined to extend this week,

“I’m really happy to fight in my house, Abu Dhabi is my home,” he said.

He is facing UFC veteran Mickael Lebout. The well travelled French fighter will have an advantage in terms of experience, at least in MMA terms, and this is something Machado is well aware of,

“My opponent has a lot of experience and I really like to face guys with that kind of experience. I train a lot and I train very hard and I’m going to go hard like in the last fight, I always go hard!”

Machado normally finishes fights inside the distance. During an online press conference it was suggested to the Brazilian that his last fight, at UAE Warriors 12, has been easy and Lebout posed more of a challenge.

Machado was adamant that it is exactly the type of challenge he relishes,

“I want tough opponents, I want to test myself against tough opponents. It’s a little hard for me (to predict what will happen) because a fight is a fight but wherever the fight is going I will be ready. If he wants to fight standing I will fight standing, if he wants to fight on the floor I will fight on the floor. I’m ready.” 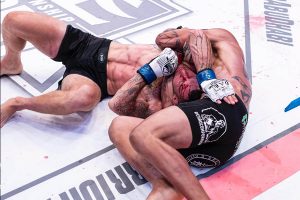 Machado has ambitions outside of the cage as well. He wants to boost his profile and believes winning MMA fights is the best possible way to do that.

Once he had made a name for himself as the UAE Warriors lightweight champion the 34 year old plans to launch an online business,

“For a long time I have an idea to create an online platform with some techniques (MMA techniques) so I am waiting for people to know more about me and then when I feel like they know about me I will try and put that platform online and share my knowledge with whoever wants to learn MMA.”