Anderson Silva is a legend in the kickboxing world. He might not be as famous as the former UFC champion who has the same name but Marcus Almeida was still very happy to win against the Glory veteran on his ONE Championship debut,

“It was a perfect night for me (because) I could use my submissions and my jiu-jitsu. I knew if I tried to strike with him, the fight would end in a very different way because he’s a legend in kickboxing and much better than me at striking.”

As a decorated BJJ black belt Buchecha knows exactly where his strengths lie. He is proud to represent jiu jitsu and hopes he can continue to be an ambassador for the sport,

“When I fight, I know I’m carrying the jiu-jitsu flag with me and I carry our whole community. That’s why I have a lot of support from the BJJ community, so that’s really great for me.” 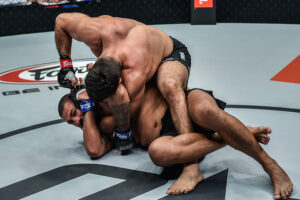 He is hoping he has done enough to earn a spot on ONE Championship’s upcoming tenth anniversary celebration,

However he is not getting carried away with himself and says it is too soon to start talking about title shots,

“My head was thinking about the debut. And now my next step is thinking about my next fight. I think I need to learn how to walk before I can run, so that’s what I want to do.”

He has been training at American Top Team as he makes the transition from BJJ to MMA and says it gives him a lot of confidence,

“If I can train with these guys and do well, I know I’m doing good. The confidence that the training gave to me was something unbelievable,” he said. 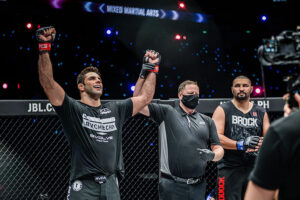 He says his standup is improving but Almeida didn’t want to waste any time before getting Silva down,

“I think the game plan worked really well. I’m training a lot, and my boxing is getting much better but I avoided the striking game against him and tried to use my best game, and that’s what I did.”

Decorated BJJ black belts don’t always make the transition to MMA look easy, just ask Yuri Simoes, so Almeida is just happy to have got his new career off to a winning start,

“I came here to get the job done and I did it.”