There were two major upsets at ONE Warrior Series 10. In the main event Byung Hee Lim stopped the much more experienced Kieran Joblin late in the opening round of their lightweight clash.

Joblin set out to get the fight to the ground and attacked relentlessly with trips, tosses and takedowns. When Kim was able to reverse position and escape the experienced New Zealander would just drag him down again.

At one stage Joblin looked to have a rear naked choke locked in from a standing position. Once again Kim was slick enough to escape and this time the Korean was able to easily brush off an attempt at a throw. 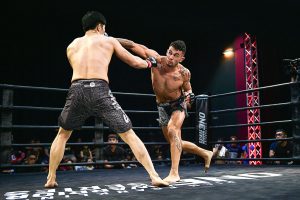 Joblin was briefly on his back with Kim standing above him and the Korean made the most of his opportunity, landing a series of thunderous punches to his prone opponent that caused the referee to dive in and call off the contest.

The Korean has a reputation for being heavy handed and one swing of his left hand altered the entire contest. Joblin had been controlling the pace of the right but when Kim was finally offered the opportunity to do damage he took it in devastating style.

It was the biggest win of the Korean’s career and his record improves to 4-4. Joblin drops to 23-13 and has lost back to back bouts, having also tasted defeat at OWS 6. 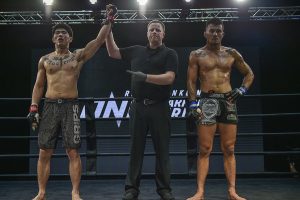 There was an upset in the co-main event too. Former BAMMA 135lbs champion Alan Philpott came into the contest against relatively unknown Egyptian Ahmed Faress as a strong favourite.

But Faress, who has been fighting regularly in the Middle East, was able to take the experienced Northern Irishman down, take his back and then sink in a rear naked choke early in the opening round.

Historically Egyptians haven’t had much success with ONE Championship. But Faress now holds a 16-3 record and looks set to possibly succeed where so many of his compatriots have failed.

Meanwhile Philpott drops to 19-11 and has now won two of his four ONE Warrior Series bouts. 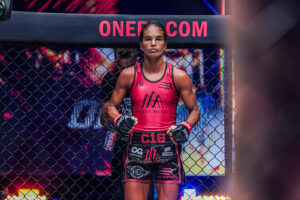 Anissa Meksen: ‘put the belt on the table’!