If you haven’t been living under a rock you will know that Tyron Woodley is boxing Jake Paul this weekend. But what you probably don’t know is that the former UFC welterweight champion got some rounds in during a trip to Phuket last year.

Long before the possibility of Woodley facing the YouTuber had been mooted he worked on his hands during a trip to AKA Thailand. Mike Swick shared the footage on Instagram just now:

There are a lot of people out there who would like to see Jake Paul get knocked out. If you are one of them then the sight of Woodley absolutely smashing the pads will surely be a welcome one.

Woodley is making his boxing debut and will hope to fare a bit better than his friend and teammate Ben Askren did. He didn’t even last a round against Jake Paul.

Whether you are a fan of these celebrity boxing bouts or not there is no denying that they bring plenty of attention to combat sports. Woodley looks set to collect a career high pay day and he will be hoping to derail the Jake Paul hype train by becoming the first man to ever beat the controversial YouTuber. 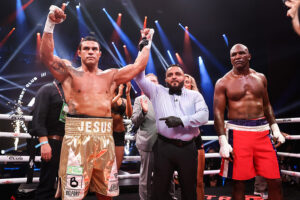