Cancer survivor Singtongnoi Por Telakun all set for ONE: ‘Warriors of Light’

The biggest battle of Singtongnoi Por Telakun’s career came outside of the ring. He was diagnosed with cancer in 2016 and underwent 36 sessions of radiation therapy and seven sessions of chemotherapy.

It was a battle the former Lumpinee champion won. Not only did he make a complete recovery, but Singtongnoi went on to return to competitive action and establish himself as one of the top Muay Thai fighters on the ONE Championship roster.

This Friday night the 38 year old is all set for another battle at ONE: ‘Warriors of Light’. It’s not an easy one either: he’s been matched with up and coming Petchyindee star Savvas Michael.

The Greek fighter is 18 years younger than Singtongnoi and has been fighting regularly in the Bangkok stadiums. The veteran knows that he will have his work cut out against an opponent who would love nothing more than to score a win over a seasoned former champion,

“Because of the age difference I expect him to be stronger than me. I really need to make sure to be ready and well conditioned but I still have the advantage in experience which I think will be my greatest asset in this fight.” 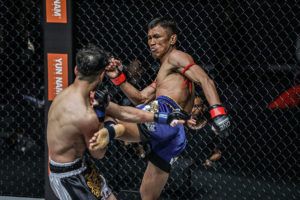 Anyone searching for a recent example of youth overcoming experience need look no further than last weekend’s ONE: ‘For Honor’. Singtongnoi’s team mate Sam-A Gaiyanghadao was knocked down twice by unheralded young Englishman Jonathan Haggerty, losing his flyweight title in the process.

Singtongnoi does not want to suffer a similar fate and has been studying his opponent closely,

“He’s got good punches, especially his body shots (so) I need to be extra careful wearing the small gloves. I wore them for my debut in Singapore but my opponent wasn’t much of a boxer.”

While the smaller gloves might give punches more impact there is also a greater risk of damaging the hands. So Singtongnoi says there is another weapon in his arsenal which he intends to unleash on Friday,

“I’m working a lot on my elbows, I think they will work well for me in this fight.” 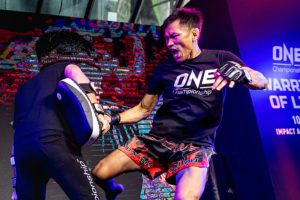 Expanding to include Muay Thai, kickboxing and even boxing on the fight cards has helped ONE Championship establish itself in Thailand. Singtongnoi made his name fighting at Rajadamnern and Lumpinee but is excited to be part of this new generation of entertainment oriented combat sport events,

“Back in the day, there weren’t opportunities like this for fighters. The sport has really grown since my days of competing, and I am happy to get to still be a part of it all.”

These days he calls Singapore home. Singtongnoi is one of several Thai legends fighting out of the Evolve MMA camp and says preparation has been going well,

“I train every day and feel good doing it. I still want to compete and feel my body can do it. I love fighting and this a great opportunity for me, I want to take advantage of it.” 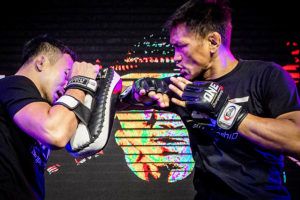 Singtongnoi has won two fights out of two in the ONE Super Series. This will be his second fight in a row at the Impact Arena and the 38 year old expects to see a few familiar faces in the audience,

“Lots of people from my family will be coming to watch me (and) I’m really happy because I don’t get to see them a lot. They will definitely give me the motivation I need to win.”

Sam-A’s defeat has opened the door for Singtongnoi to challenge for the flyweight title. It would be an incredible comeback story but the cancer survivor will have to be at his very best if he wants the fairytale to continue past Friday.