What was supposed to be a coming out party for Yushin Okami making his ONE Championship debut turned into a stunning upset as Kiamrian Abbasov finished the former UFC title contender with a second round TKO at ONE: ‘For Honor’ in Jakarta on Friday night.

A veteran with nearly 50 fights on his resume, Okami signed with ONE Championship specifically so he could make a run at the welterweight title.

His introduction started off strong after Okami managed to plant Abbasov on the ground with a perfectly timed inside trip takedown in the opening round.

Methodical as ever, Okami worked his way into a better position as he shredded Abbasov’s defense but he wasn’t able to do much damage despite his suffocating grappling game.

Abbasov decided to just hold on until the bell sounded so he would have an opportunity to turn the tables on Okami in the second round. That is exactly what the Kyrgyzstan native did by immediately going on the attack and never allowing Okami to settle into a rhythm again. After landing a hard right hand in the first round, Abbasov saw an opening for a similar punch in the second, which ultimately led to the end of the fight.

Abbasov’s strike didn’t exactly land flush but it cracked Okami hard enough that he fell to the ground as a result.

Abbasov had no desire to ever allow Okami back to his feet again because he immediately followed him to the floor where he began launching punches down on him in rapid-fire fashion.

Okami did his best to defend the punishing shots or at least scramble free from the bad position but he was unable to do either as Abbasov’s fists kept hitting their target. 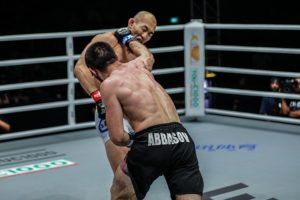 Finally after several thudding punches landed with no sign that Okami was going to escape, the referee was forced to stop the contest with the end coming at 1:10 into the second round.

It’s a huge win for Abbasov, who moves to 21-4 in his career and now becomes a potential title contender in the ONE welterweight division. His opponent drops to 35-13.

Current champion Zebaztian Kadestam doesn’t have an opponent scheduled right now and 35-13 Abbasov could be a contender for a title shot. James Nakashima, who remained undefeated following his second win in ONE Championship earlier this year is also up there. Former ONE featherweight champion Marat Gafurov got back on track with a unanimous decision win over Tetsuya Yamada in a catchweight contest from Jakarta.

After suffering a stunning knockout loss in his last outing, Gafurov stuck to what he knows best by repeatedly taking Yamada to the ground and out muscling him with his powerful grappling attack.

While Yamada did make a couple of attempts to lock up a guillotine choke submission from the bottom, he was surrendering the takedowns with relatively no resistance as Gafurov was able to pick his shots and put him on the ground time and time again. 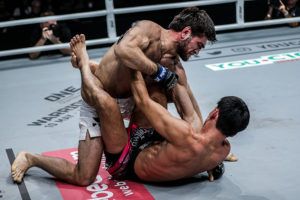 The best strike of the fight for Yamada came after he managed to connect with a knee just as Gafurov dove for a takedown but the Russian mauler just ate the shot and plowed forward anyways.

It was more of the same in the third and final round as Gafurov was able to rag doll Yamada to the floor and maintain a suffocating top game to grind out whatever time was left on the clock.

The judges all agreed with Gafurov getting the victory.  He improves to 17-2 and strengthened his case for a rubber match with reigning champion while Yamada drops to 26-7-2. Following a hard fought split decision loss in her last fight, Priscilla Hertati Lumban Gaol got back in the win column on Friday with a victory over Nou Srey Pov in a hometown showdown on the main card.

Throughout the fight, Lumban Gaol showed off her grappling prowess as she constantly dragged Pov to the mat into her world where she was clearly the stronger fighter.

While Pov did her best to escape and return fire on the feet, she failed to consistently stop Lumban Gaol from finding a way inside before bringing the action back to the ground.

When the fight was over, Lumban Gaol knew she had done more than enough to secure the victory but this one was even more special to her.

Following her unanimous decision win, Lumban Gaol revealed that her father was in attendance for the first time in her career to see his daughter perform in front of the Jakarta faithful.

The win also moved Lumban Gaol to 6-4  and with three wins in her past four fights she moves closer towards atomweight title contention. Pov drops to 1-1.

American featherweight Thanh Le made quite an impression in his ONE Championship debut on Friday as he flatlined Yusup Saadulaev with a second round knockout.

Saadulaev managed a strong start after he avoided Le’s strikes early before landing a takedown that brought the fight into his world. Once he had Le down on the ground, Saadulaev was constantly threatening with submissions and a vicious ground and pound attack that prevented the former LFA champion from working his way back to the feet.

Saadulaev was unable to get the finish and he paid for it in the worst way possible in the second round.

As soon as the action started again, Le fired off a lightning quick kick that glanced by Saadulaev’s head and let the Russian know that he wanted no part of a stand up battle.

Just as Saadulaev ducked down to look for a grappling exchange, Le timed another powerful kick except this time he connected flush with his knee to the Russian’s head.

Like a bomb exploded in his face, Saadulaev immediately fell unconscious to the canvas as the referee rushed into stop the fight before he could take any more damage.

The end came at just 12 seconds into the second round as Le 9-2 gets a highlight reel finish in his ONE Championship debut. Saadulaev drops to 17-5-1-1. 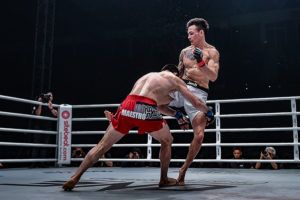 Dae Hwan Kim returned with a win on Friday in a fire fight against Jumayi Ayideng as the South Korean earned a first round TKO in the opening bout on the main card.

After a slow start with both fighters trying to find an opening, Kim finally pressed forward and started unleashing a barrage of bombs with Jumayi happy to trade punches with him.

The bantamweights went back and forth exchanging shots until Kim finally landed a crushing right hand behind the ear that put Jumayi on wobbly legs. Smelling blood in the water, Kim went on the attack with a barrage of punches as he trapped Jumayi in the corner with no room to escape.

As the flurry of punches continued to chip away at Jumayi (17-5), the referee finally saw enough and called a stop to the contest at 4:11 into the first round. Kim (15-4) moves to 3-1 in his past four fights while bouncing back from a loss in his last appearance in ONE Championship.