Carlos Prates is hoping to graduate to the major leagues with a win at ONE Warrior Series 6 tomorrow. The Brazilian holds a 9-4 professional record and is based in Thailand where he also has a burgeoning reputation in the Muay Thai scene.

The 25 year old is slated to lock horns with Gadjimurad Abdulaev in Singapore. The Russian is undefeated and Prates sees this as the perfect opportunity to showcase his skillset in front of the ONE Championship matchmakers,

“This fight is very important because it’s my chance to show the world that I am ready to face whoever my opponent is and prove that I deserve to compete on the biggest stage of this sport. I want that contract,” he declared.

Prates holds a record of 9-4 and is coming off a stoppage win against South Africa’s Gunther Kalunda at OWS 5. These days he calls Phuket home and his love of martial arts dates back to childhood days in Sao Paulo,

“I started to train Muay Thai at a very young age. I got really hooked after watching some videos of Pride FC at the house of my coach’s friend. I saw Wanderlei Silva crushing and beating everybody in Pride, which was inspiring for a Brazilian teenager like at that time. The idea of competing in MMA crossed my mind immediately when I saw his fights,” Prates said. 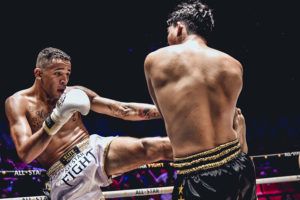 Prates competes regularly in Muay Thai and says this is part of the appeal of living in Phuket,

“I came to Phuket to train Muay Thai but when I got there I fell in love with the lifestyle, the food and the culture. In Phuket I can keep my focus on training (because) I can train, fight and make money unlike in Brazil where I would have to take another job to make money,” he said.

Prates currently fights out of Phuket Top Team which is a popular destination for fighters looking to prepare for ONE Championship bouts. He has won four fights out of four since relocating to Thailand and credits his camp for this career resurgence,

“I am so thankful for their help. They take care of me and my training. I have excellent coaches there. My manager and I made the best decision to train in Phuket because it opened new doors of opportunities for us,” he stated.

Prates arrived in Thailand with a 5-4 professional record. The scene in his native Brazil is extremely competitive but there was little at that stage to suggest he would end up on the verge of securing a contract with one of the world’s biggest MMA promotions. But he hasn’t lost a fight since leaving Brazil, an undefeated streak which stretches all the way back to 2014.  Given the calibre of the two opponents he has faced in the ONE Warrior Series, two wins would surely be enough to earn that ONE Championship contract. Prates is determined to achieve just that,

“I will just do my best every time I compete. I am willing to fight over and over again to prove that I deserve to be in ONE Championship,” he said.

For the Brazilian development is the main focus, both from a sporting and a personal perspective. The man from Sao Paulo believes that if he continues to improve every day he is guaranteed to progress both in and out of the ring,

“I challenge myself every single day because I want to be a better athlete and individual. At the gym, I embrace the challenge because it keeps me on my toes in both life and MMA,” he said

Abdulaev is an undefeated champion, just like Kalundar. If Prates is able to fight his way into ONE Championship then there can be no question he has done it the difficult way, taking on opponents who would beat many of the current welterweights on the roster.

The Brazilian knows he can make a big statement with a win tomorrow and is just excited to have the opportunity to compete in the sport he loves,

“I am looking forward to my fight and I cannot wait to showcase my skills again and do what I love to do. A victory over another undefeated fighter will put me one step closer to my goal, which is getting a contract with ONE.”