Su Mudaerji is part of an exciting generation of Chinese fighters who have been enjoying recent success in the UFC.

The 24-year-old will face Uzbekistan’s Zarrukh Adashev in Abu Dhabi on Wednesday at UFC Fight Island 8 and is coming into the fight on the back of an emphatic first round finish in his last outing back in November.

Mudaerji needed just 44 seconds to knock out Malcom Gordon at UFC Vegas 15 in what was a big statement.

Despite that being his first stoppage win since joining the promotion in 2018, Mudaerji has played down the significance of the finish.

Mudaerji has now gone 2-1 since arriving in the UFC and recognizes that quick stoppages can play a key role in his career trajectory.

“It is important. Audiences can remember me quickly and I can prepare in a better condition without injury. Keeping injury away is always important to fighters.”

With just over a six-week gap between fights, it’s been a quick turnaround for the flyweight hopeful, but he’s hoping his commitment will set a good example,

“The time for me to prepare is short (but) I have lots of kids behind me, and I need to be a role model for them. It is also about momentum for me.”

Adashev (3-2) has only one previous fight in the UFC, and that came to a halt swiftly as the 28-year-old was knocked out by Tyson Nam inside 32 seconds at UFC Vegas 2.

Despite his opponent’s lack of elite-level experience, Mudaerji is refusing to write him off, and said,

“Every fighter in UFC is threatening, and I hope I can play coach’s strategy well during the fight.”

Mudaerji clearly has supreme confidence in his ability as a martial artist but remains focused. He will no doubt have received some praise from fans back home, for example, but doesn’t pay too much attention to what’s being said about him.

“To be honest, I don’t know. I do not check comments frequently,” he said. 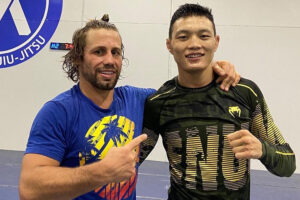 In order to fulfill his obvious potential Mudaerji has travelled to the US to train at Team Alpha Male in Sacramento. During his time there he has been working with UFC veteran Urijah Faber,

“Coach Faber gave me lots of help. We have lots of jiu-jitsu skill class, and I have a deeper understanding about the fight,” he said.

Training at TAM has given Mudaerji the chance to work alongside some of his compatriots including #14 ranked bantamweight Song Yadong. He says that ‘the Kung Fu Monkey’ as well as Li Jingliang, who also fights this month, have been a positive influences on him,

“Leech and Yadong are experienced, and they shared me lots of experience no matter in life or in the fight. Yes, it is special to me,” he said.

Both Leech and Yadong know what it’s like to crack the top 15 in their respective divisions, but Mudaerji has even bigger aspirations. Outlining some serious goals for 2021, he said,

“I will make top five in flyweight.”