CM Punk might not have had a successful MMA career but the WWE legend still knows the sport.  He must have been a Pride fan because when asked to name the greatest mixed martial artist of all time by Helen Yee he replied without hesitation,

“I’ve got a soft spot in my heart for Sakuraba. Probably a lot of people wouldn’t pick Sakuraba but I’m a pro wrestler at heart and I know Saku is, too. So he’s one of those guys that kind of captures everything I love about mixed martial arts.”

CM Punk expanded further about what the allure of Sakuraba is to him,

Sakuraba made his name at the start of the century and earned a reputation for being ‘The Gracie Killer’. He beat Royler Gracie, Renzo Gracie and Ryan Gracie.

Just like CM Punk he made the transition from professional wrestling into MMA. But Sakuraba was successful in both sports, earning legendary status in Japan and beyond.

It is not often Sakuraba gets described as the ‘GOAT’. But it is good to hear that CM Punk knows his Asian MMA and is familiar with the sport’s history! 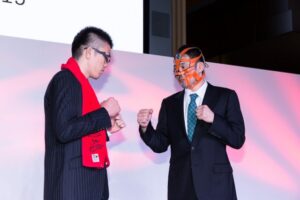