It’s been almost eight months since Courtney Martin was named best female athlete at the GAMMA World Championships in Singapore, but that doesn’t mean the achievement has completely sunken in.

The Australian almost entered the competition on a whim, seeing it as an opportunity to gauge where she sat in the grand scheme of global MMA and get some more valuable amateur experience under her belt.

Two days later, Martin had reeled off three straight wins in the most highly contested division at the competition, earning her the aforementioned best female prize and, more importantly, a multi-fight deal with Asian promotion ONE Championship.

“I went into GAMMA thinking it would be a really good test to see where I’m at against other girls around the world, not even really thinking I’d make it past the first match,” Martin admits.

“I didn’t even mention it to anyone when I left. There was no point, because in my head that was just completely irrational and unrealistic.”

“Then next thing you know, I’ve won the whole thing and it was like ‘wow, that really happened?’ For it to actually happen is still a bit mind blowing to me.”

“I was a bit in shock for about a few months afterwards. We were at the awards ceremony and they took us back upstairs, it kind of dawned on me that (winning best female) was what was happening.”

“I still didn’t want to believe it though, it was still too good to be true.” With nine bouts to her name coming into GAMMA, Martin had already decided that professional fighting was a dream she wanted to pursue. Her stellar performance when the curtains went up merely validated her own goals and unwavering self-belief.

“It wasn’t until after GAMMA that I was like ‘maybe I’m onto something here. Maybe this is a little bit more than a hobby’.”

Martin’s efforts in Singapore were difficult to ignore among her hundreds of fellow competitors.

In the opening round, she finished Morgane Dehaye in the second round with a slick north-south choke. Her second opponent fared little better, with Sandra Succar falling to another second round submission, this time a rear-naked choke.

Martin then had just an hour to prepare and regroup for the final against LaNeisha Vinson, which proved to be an enormous test of both skill and mental fortitude.

After sustaining an opening round blitz from the American, the likes of which she’d yet to experience in the ring, Martin bounced back to turn the tide in the second and third round, exerting her advantage in the grappling department and ultimately having her hand raised in a stunning comeback win.

That win proved to both herself and the judges that she was the kind of exceptional talent worthy of a spot on the ONE championship roster.

“It was a bit of an emotional roller coaster but it was a great fight. It was a real learning experience,” she reflects.

“It was nice to realise that I’m made a bit tougher than I thought I was. That I’m pretty resilient and when push comes to shove, I’m going to keep going. It was definitely a big learning curve.” 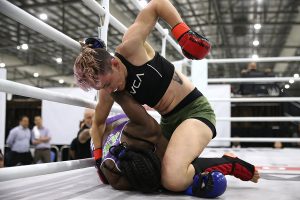 Not that Martin’s ever been shaken by a bit of blood. Her mental resilience and ability to remain calm under the pressure becomes all the more understandable when you discover her original profession – an emergency nurse.

Such was her dedication to her newfound passion for MMA, she readjusted her hours to work the night shift part-time at the local metro hospital to allow her to train by day, save lives by night.

“I always think today is the day I’ve seen the worst of the worst, and then something else will come in and you’re like ‘okay, not just yet then’.”

“It seems to work for me because I can train during the day, get some sleep in and then head to work. Home at 8am, sleep until about 2:30pm, then I’ll wake up head to training, get a couple hours in there then head back to work for a 9pm start.”

That dedication has clearly paid off for Martin, who’s thrown herself wholeheartedly into training at Perth’s Wolf’s Den gym, under coach Stephen Walton.

“I kind of rearranged my life a little bit and I started taking training a bit more seriously and I’ve got to here.”

“It’s been a bit of a whirlwind really over the last couple of years. I never expected to be where I am but it’s great. I’m pretty happy with it,” she laughs. 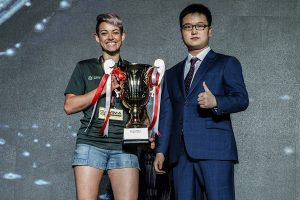 Now the fun really begins for Martin, as she eyes her competition at ONE’s talent-rich women’s strawweight division.

For obvious reasons, there’s been no word yet one where, when or, against who Martin will make her promotional debut, but, studious as ever, she’s already started doing some homework on potential adversaries.

But in reality, the 27-year-old isn’t fussed about who her first-up opponent is. She just wants to get back into the routine of fight camp – her own special and somewhat twisted version of a ‘happy place’.

“During fight camp I thrive. I’m the best version of myself possible. Knowing the routine and planning out my training for the week and being so dedicated to it… working the mental aspect in.”

“It’s just constantly trying to better yourself. I love the dedication and the routine and just pushing yourself to those boundaries.”

It goes without saying that the grappling specialist embraces the unique mental challenges that come with life as a professional fighter. Martin has certainly come a long way since she walked into the gym with a friend five years ago to sample a kickboxing fitness class.

“As soon as I started MMA I knew that it was what I wanted to do. There’s something about it. It’s a bug.”

“Now I want to see where this takes me, do the best that I can and represent Australia and my gym as well as I can.”