Colbey Northcutt on fighting during the Covid-19 era

To the audience watching live on TNT in the US this month’s ONE Championship cards probably seem fairly standard. Apart from absence of the occasional camera shot of the crowd there was nothing to remind viewers that we are in the midst of a global pandemic.

From a fighter’s perspective things were very different. Colbey Northcutt scored the most impressive win of her career at ONE on TNT Part IV last week but describes the experience as difficult for many reasons.

For starters the fight took place in Singapore. So while it was live on TNT on Wednesday night in the US, the fighters were actually competing on Thursday morning local time,

“I am super happy to get the second win obviously circumstances are a little bit different with Covid so the experience was something that I couldn’t prepare for. Flying to another country, going into quarantine, all the PCR tests, not being able to leave the hotel…” 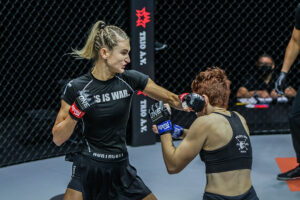 While these inconveniences are not exactly minor Northcutt says the thing that affected her most was the absence of a crowd at the Singapore Indoor Stadium,

“It’s crazy because the arena is so large (and) last time, all the fans. you could feed of their energy. Fighting at 8:30 in the morning, it was like I had to hype myself up because I couldn’t feed of the energy of the crowd. It was a surreal experience.”

This was Northcutt’s second time fighting at the Singapore Indoor Stadium but her first experience of competing in a completely empty arena,

“Getting to be the first fight of the night was awesome but it was so pitch black and quiet out there. It’s an experience you can’t describe to somebody unless they’ve done it.” 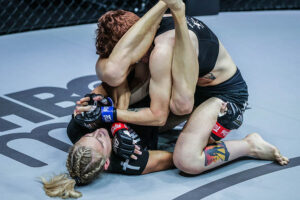 She coped admirably, needing less than three minutes so submit GAMMA bantamweight champion Courtney Martin. Northcutt is known for her karate but was happy to display a different set of skills,

“It feels great, I couldn’t have asked for a better finish. I wanted a knockout but getting a submission just shows that I have a ground game too and that’s what I wanted to show everyone.”

Northcutt trained for this fight at Team Alpha Male in California and had husband and Bellator veteran Raymond Daniels in her corner. She says the hours put into training for this fight paid off,

“I knew she was going to be aggressive and come forwards. I wish I had got to do more of my stand up but she was great at coming straight forwards and pushing me back to the cage but I wasn’t too worried (because) I had been in that position a million times before so I was calm and patient and waited for her to make mistakes that I could capitalize on.”

The position was so familiar to Nothcutt that she could actually hear her coaches voice from the sessions spent working on this exact situation,

“I could hear Urjah Faber’s voice in my head from practice being in that position telling me to be patient and look for the openings. Everything worked out perfectly.”

She also hopes the performance will cause people to reevaluate her as a fighter. Northcutt was happy to showcase her grappling skills and thinks opponents might think twice about trying to take her down in future,

“Maybe people will start looking at me as not just a striker and more of a well rounded martial artist. That may make girls hesitant to take me down because I can finish them there also.”